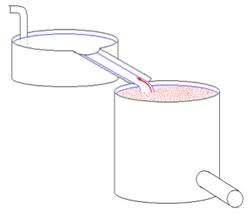 When the height is right, tea leaves zip up the waterfall and go for a swim in the upper container.

It’s not just salmon that can leap nimbly up waterfalls, according to a new study in the physics arXiv

: wee particles like tea leaves and industrial contaminants can flow upstream if conditions are right. Cuban scientists first noticed this strange phenomenon while brewing yerba mate by decanting pure water from one container into another containing the tea leaves. Mysteriously, tea leaves sometimes appeared in the water container. They investigated and found that when a waterfall from one container into another is no more than a centimeter high, the water’s flow generates a counterflow along the edges of the channel that goes in the opposite direction, drawing chalk powder and tea leaves up into the higher vessel. While scientists knew that such counterflows could form, the idea that they might persist even after the water goes over a waterfall is a kooky new take on it. 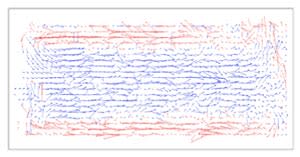 This map of the velocities of particles on the water's surface shows the counterflow in red and the main flow in blue.

It’s not all fun and water games, though—the physicists point out that this means that chemicals and particulates can potentially travel upstream too, which could have implications for industry and attempts to curb environmental contamination. Just make sure your drop-off is higher than a centimeter, though, and the effect should disappear. Image credit: S. Bianchini, A. Lage-castellanos, E. Altshuler.