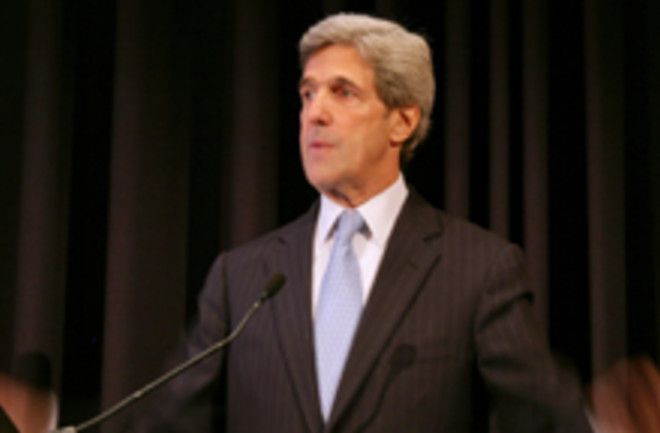 Nearly a thousand pages in length, the Senate climate and energy bill (pdf) is here. Senators John Kerry and Joseph Lieberman unveiled the revised bill today. The carbon emissions targets are: 17 percent below 2005 levels by 2020, and 83 percent below 2005 levels by 2050. That's made to match the goals in the House bill that passed in 2009. In addition, the bill proposes putting a price on carbon. Sen. Kerry says:

"The most important and unique thing this bill does is to put a price on carbon that reflects its real cost to our society and our economy," he said. Investing in renewable energy, he continued, "becomes financially attractive once carbon is really priced at what it costs us." Kerry added, "This is going to change the face of American energy" [CBS News].

The so-named American Power Act comes out in the shadow of the ongoing BP oil spill in the Gulf of Mexico, something that's painfully clear in the new text.

One of the central elements of the Senate bill — incentives to increase domestic offshore oil production — has been radically rewritten in recent days, in the aftermath of the explosion and fire on a drilling rig in the gulf on April 20, leaving an undersea well leaking oil that has yet to be stanched. Instead of providing for a broad expansion of offshore drilling, the Kerry-Lieberman measure would have the effect of drastically limiting oil operations off the Atlantic and Pacific coasts by giving states the right to veto any drilling plan that could cause environmental or economic harm [The New York Times].

That veto power would extends to 75 miles beyond the state's shoreline, and the Interior Department would have to study how badly a leak would affect the economy or environment of a state. That's not the only concession to the states written into the new bill.

States that go ahead with offshore drilling would retain 37.5 percent of the federal revenue generated — a shift from current policy. Now royalty revenue goes to the Treasury; states collect no royalties [AP].

President Obama praised the bill and its chances for passage. But, as the New York Times reports, it's not clear yet whether the bill will even make it to the Senate floor this year because of the crowded schedule. We'll keep following the story. Related Content: 80beats: Climate Bill Passes in the House, Moves on to Senate

DISCOVER: It's Getting Hot in Here: The Big Battle Over Climate Science