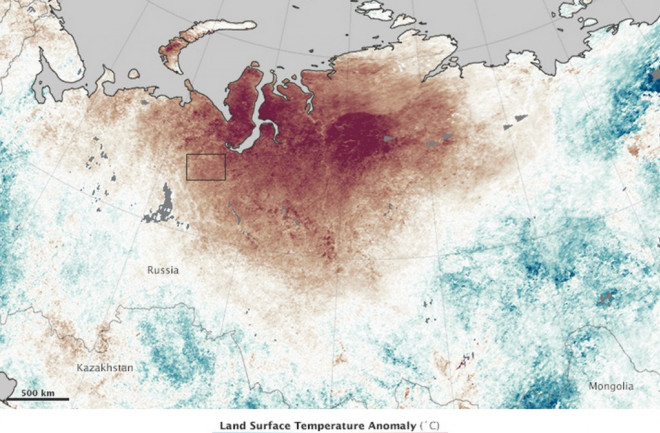 The map above shows how temperatures departed from the long-term average in Siberia July 20-27, 2013. (Image: NASA Earth Observatory) Last Sunday I posted a story about fires blazing in Siberia, which had been baking in near-record temperatures for over a week. Now, NASA's Earth Observatory has produced this map with an accompanying piece documenting just how hot temperatures have been in the region. The reddest colors indicate where high temperatures were more than 15 degrees C warmer than the long term average between July 20 and 27. The northern city of Norilsk is in one of those red areas. Daily high July temperatures there typically average 16 degrees C (61 degrees F). But during that week they soared to 32 degrees C (90F). Norilsk, among other places, is not expected to see much relief for awhile. Highs in the upper 80s and low 90s are forecast for the weekend. And much warmer than normal temperatures are forecast for all of next week. (You can check the weather in Norilsk here.) By blocking weather systems that would bring rain and cooler temperatures, a persistent high pressure system is the proximate cause of the high temperatures, according to NASA. But by making high temperatures even higher than they otherwise would be, human-caused global warming also plays a role. The result:

An animation of images captured by NASA's Terra satellite southeast of Norilsk, Russia. Please click for the animation. (Images: NASA) Click on the image above for an animation showing an area of Siberia southeast of Norilsk. The first image was captured by NASA's Terra satellite on July 26th, and the second on August 1 — after a cluster of wildfires had ignited. It will be interesting to see how the rest of the summer develops.