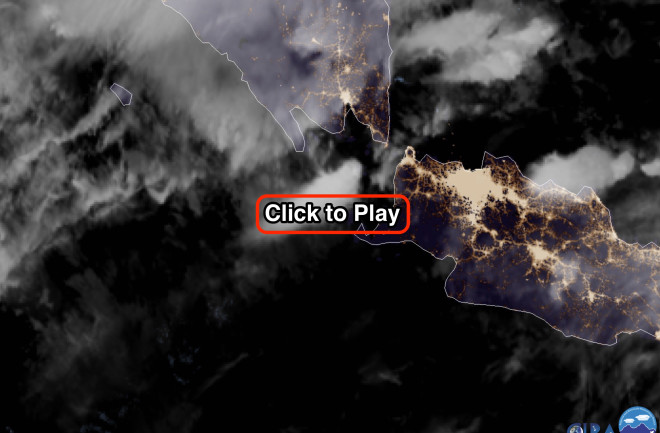 A volcanic cloud from the eruption of Anak Krakatau in Indonesia on December 22, 2018 is seen in this animation of satellite images acquired by the Himawari-8 satellite. Two distinct volcanic pulses are evident. (After clicking on the screenshot above, click "play" in the upper left corner of the page that launches. If the animation does not run, refresh the page. Source: RAMMB/CIRA SLIDER) In Indonesia, they call it "Anak Krakatoa, meaning "child of Krakatoa." It's a volcano that rose from the sea in the 1920s decades after one of the most deadly volcanic cataclysms in recorded history killed tens of thousands of people and all but obliterated the island of Krakatoa, between Java and Sumatra. Now, Anak Krakatau has itself brought great misery to Indonesia, with an eruption that apparently triggered an underwater landslide, which in turn sent a tsunami racing toward the western tip of the island of Java. A wall of water roared ashore, catching residents and vacationers completely unawares. As I'm writing this on Christmas Eve, more than 370 people have perished, and more than a hundred still are missing. When Anak Krakatau erupted on December 22, Japan's Himawari-8 weather satellite was watching from geostationary orbit, 22,239 miles overhead. Click on the screenshot above to watch what the satellite saw. The animation consists of "GeoColor" imagery acquired in different parts of the electromagnetic spectrum at 10-minute intervals starting at 11:00 UTC. A first pulse of ash is visible at about 13:40, and then a second one at 15:20. As the animation continues, dawn breaks and a plume of ash and steam can still be seen amidst a cloudy atmosphere. Here's what the eruption looked like in the infrared part of the electromagnetic spectrum:

An infrared view acquired by the Himawari-8 satellite shows the volcanic eruption of Anak Krakatau. (Source: Cooperative Institute for Meteorological Satellite Studies) The infrared data in this animation reveal cloud-top temperatures of -80º Celsius or colder. This suggests the plume billowed up to nearly 10 miles high in the atmosphere, according to the Cooperative Institute for Meteorological Satellite Studies. As the ash soared high, the volcano's south flank collapsed. For a visual explanation of how that probably led to the tsunami, check out this video from Geoscience Australia: https://youtu.be/AXHN14IHtLY It wasn't as if Anak Krakatau had been dormant prior to the eruption. For months, the volcano had been spewing superheated ash into the sky and lava into the Sunda Strait between Java and Sumatra, Indonesia's two largest islands. In July, the volcano even threw truck-sized lava bombs skyward. But the tsunami crashed ashore without warning. News reports say Indonesia's tsunami warning system had not been operating properly. But even if the system had been operable, it might not have made a difference. Speaking of the tsunami in an interview on National Public Radio, University of Alberta geoscientist Stephen Johnston noted that were "no sensors in the way that would have detected it." And even if sensors had been present, the tsunami was triggered so close to shore that "there would have been no chance for any significant warning to have got to these people."

Clouds pour from the Krakatoa volcano during May of 1883, as depicted in a lithograph originally published in 1888 by a Royal Society Report on the eruption. This was an early stage in an event that led to one of the most devastating volcanic cataclysms on record. (Source: Wikimedia Commons) Death and destruction from volcanic eruptions are nothing new in this part of the world. In fact, Krakatoa — Anak Krakatau's 'parent' — exploded far more massively in August of 1883. The explosion, following more than a month of activity, rocketed billions of tons of pumice up to 50 miles into the sky; ten days later, dust fell 3,000 miles away. The explosion also caused the entire 2,600-foot-high volcanic cone to collapse, obliterating most of the island and triggering tsunami waves that towered up to 130 feet high. An estimated 36,000 people perished, swallowed up by the mountains of onrushing water.

Anak Krakatau, or "Child of Krakatoa," spews ash during the 1920s. The volcano rose up after Krakatoa island was destroyed following the massive eruption in 1883. (Source: Tropenmuseum, via Wikimedia Commons) It took more than 40 years for Anak Krakatau to rise up from the undersea remains of Krakatoa. You can see it erupting in 1928 in the photograph above.