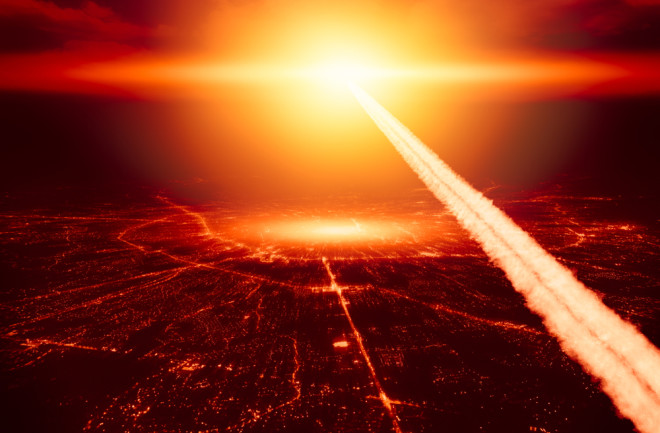 If you’re a doomsday prepper or were alive during the Cold War you may already be aware – and fearful – of an imminent electromagnetic pulse (EMP) event. It’s a disaster scenario that’s captured the imaginations of filmmakers and video game creators, as well as legitimate organizations, like the United States government.

EMPs are brief but powerful jolts of high-frequency electromagnetic waves that can fry electronics – and on a grander scale may have the capability to cripple power grids, leaving millions of people without electricity. It’s been theorized that we’d plunge back into the dark ages, or worse — in 2017, representatives from the now defunct EMP Commission cited comments that a worst-case scenario could lead to millions of deaths.

EMP disasters are the stuff of science fiction, but they’re not beyond reality. We’ve seen massive solar flares — like the one during the 1859 Carrington event — cause electronic systems  nationwide to fail (although telegraph lines were the main casualty back then). And knowing how powerful these blasts can be, the United States and Russia found ways to weaponize EMPs during the Cold War via nuclear bombs.

But besides theorizing about the threats that EMPs could pose to civilization, little research has been done on what the actual impact of an EMP event would be, and what we can do to prepare in the event of a disaster.

Here’s what science does (and doesn’t) know about EMPs so far — and how concerned you should be about building that doomsday shelter.

Surprise! Your Power is Out

It wasn’t a coincidence that 36 strings of streetlights suddenly went dead in Honolulu on July 9, 1962. That same day, the United States tested Starfish Prime, a nuclear bomb detonated above the Pacific Ocean that sent out high-altitude electromagnetic pulses – or HEMPs, as they’re known – and accidentally took Honolulu’s power out with it.

The bomb test was part of Operation Fishbowl, the United States’ Cold War-era program to develop high-altitude nuclear weapons that could detonate above the atmosphere and emit high radiation to compromise electronics on the ground. And even though the test site was about 900 miles from Honolulu, the blast was strong enough to be seen from the island and take out a transmission station.

But it wasn’t until 1989 that Sandia National Laboratories in Albuquerque released a report that suggested the blast caused the Hawaiian power outage. And in fact, similar events happened in Kazakhstan when Russia did HEMP testing over the country during Project K in the Cold War. A paper on the damage in 1998 noted that some 300 miles worth of power lines were compromised as a result of testing.

HEMPs have the potential to cause more damage than naturally-occurring solar flares because they emit higher levels of radiation. Electromagnetic waves from such events are divided into three levels, commonly known as E1, E2 and E3. E2 and E3 waves do damage comparable to lightning strikes and mild solar flares, respectively.

E1 pulses, which have the highest frequency, reach the furthest and cause the most damage. High-frequency electromagnetic pulses disrupt the normal flow of electricity in modern devices. When an extreme interference like an E1 wave comes in contact with your cell phone, computer or even your local power plant, the resulting surge can destroy components and render our technology useless.

And just because nuke-generated E1 waves pack the most punch doesn’t mean we shouldn’t be wary of solar flares. In March 1989, Quebec’s power grid was shut down by a massive flare that stopped subways and airports and left nearly 3 million people without power.

So, the most vulnerable victim in a modern-day EMP event is the power grid. Simply put, that’s all the wires, transmission stations and power plants that bring electricity to your home and office. But how much of that equipment is ready for an EMP event, and what could we do to make it better?

Substations are the central hubs of the power grid, but if you don’t work for a power company, it may not be obvious. Next time you’re driving around, watch where the power lines go — eventually they’ll connect to large metal towers on a fenced-in patch of dirt or rock.

On the outskirts of the substation will be a little shed, called a control house. Think of it as a giant version of the circuit breaker in your home. It houses the switches, batteries, meters and control boards that keep transmission lines and transformers in check.

The control houses can be made of a variety of materials – concrete, brick, metal, or a combination of the three. But little research has been done on what might happen to these power centers during an EMP. To find out, Randy Horton and his colleagues at the Electric Power Research Institute (EPRI) took on the challenge in a report released in April.

Horton and his colleagues at EPRI spent the last three years simulating what happens when E1 waves ripple through the equipment used in power stations. This included actually zapping transformers and transmissions lines with high-frequency pulses and building substation housing out of different materials and putting them to the test to see how the electronics inside held up.

The results showed that although some parts of power lines and transformer equipment were damaged by the pulses, they weren’t as drastically affected as some predictions presumed. And with the control houses, some structures held up better than others — namely the ones made with mostly metal, not concrete. The conductive qualities of metal make the control house act like a Faraday Cage, absorbing and dissipating the incoming energy so none reaches the electronics inside. While the modern-day metal control house designs weren’t totally EMP-proof, they did have better shielding qualities than their concrete counterparts.

EPRI is now working with 18 utilities across the U.S. for further testing and to develop plans to create EMP-resistant housing in substations. Although these power centers come in different shapes and sizes, Horton wants to develop a common blueprint that could aid in helping companies when taking protective measures against outside forces.

“We’re trying to get to the point where you don’t have to do individual design for individual substations,” he says, although he wouldn’t call it a “one-size-fits-all” type of project. Rather, the guidelines will help each utility figure out what materials they can use to better EMP-proof their substations.

The End of the World as We Know It?

So, how likely is it that a HEMP attack or solar flare would send us spiraling into a chaotic doomsday situation? The answer isn’t simple, but Horton says utility companies are already prepared to handle blackouts, and wouldn’t be completely in the dark about how to revive the grid after an EMP-related outage.

Power companies have what’s called a black start plan, which targets specific substations and uses exterior equipment to jumpstart them. As long as that equipment stays safe, it can help get the grid back on its feet in a blackout.

The only caveat is if an EMP does significant damage to that equipment – but with preventative measures, such as the ones EPRI is helping develop, the grid could stay safe in a disaster scenario.

“If this happens, utilities aren’t like, ‘oh my God, what do we do,’” Horton says. “The black start plans should work just like they always have.”

It could be a long road to fully protecting the grid from a flare or HEMP attack, but it’s not without government attention. The initial EPRI study was released just a month after President Trump signed an executive order to encourage research into EMPs, noting that government agencies must share critical data and technical expertise with the private sector. So the EMP-proof substations of the future may be here before we know it.

In the meantime, if you’re still planning to build that doomsday shelter, make sure it’s made of metal, not concrete.