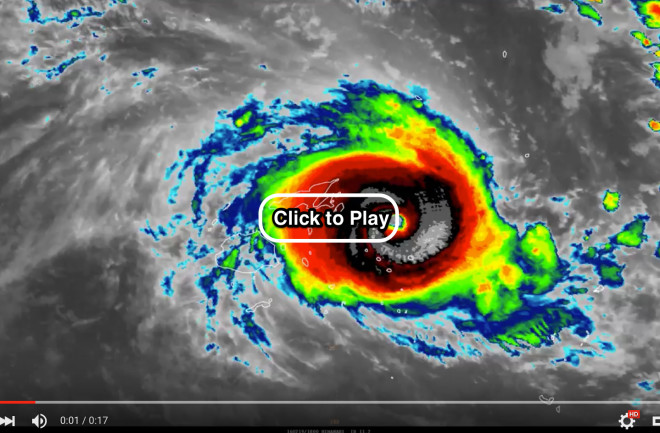 The Himawari-8 satellite provides ominous views of Severe Tropical Cyclone Winston bearing down on Fiji in the South Pacific on Feb. 19, 2016. The first part of the video shows the storm in visible light. Next, we see an infrared view of the cyclone. And last, a view showing water vapor. (Source: NWSOPC) As I am writing this on Friday evening in Colorado, Severe Tropical Cyclone Winston is bearing down on the most populous islands of Fiji, posing a dire threat to the South Pacific island nation with winds that could eventually reach a mind boggling 224 miles per hour. The cyclone has already made landfall on the small Fijian island of Vanua Balavu — at about 1 pm EST today. This means the storm will go into the record books as the strongest tropical cyclone ever to hit the nation of Fiji. And it is only the 11th Category 5 storm to have been observed in the South Pacific east of Australia, according to Weather Underground. Since hitting Vanua Balavu, Winston has been churning westward, heading toward the two biggest Fijian islands: Viti Levu and Vanua Levu, which account for 87 percent of the country's population of almost 860,000.

Severe Cyclone Winston forecast track. (Source: JTWC) The storm had been forecast to hit Fiji's capital, Suva, on Viti Levu. But since then, the Joint Typhoon Warning Center has nudged the forecast track to the north just a tad. Click on the thumbnail at right for the current track from the JTWC. (But be aware that by the time you are reading this, the cyclone may have take a slightly different course). When it reaches the islands at about 6 p.m. local time (1 a.m. EST Saturday), Winston is forecast to have sustained winds of 185 miles per hour — and gusts up to 224. In addition to being incredibly powerful, Winston is one bizarre storm. After forming more than a week ago, it hit the same island — Vava'u in Tonga — twice. And as the map shows, after heading east, it also managed to turn on a dime, reversing direction. Tropical cyclones are fueled by warm sea waters — and Winston has been traveling over the very warmest waters in the entire Pacific right now:

In this visualization of current sea surface temperatures, magenta is indicative of the warmest waters. Severe Cyclone Winston is currently traveling over surface waters at about 31 degrees C, or 88 degrees F. This is 1.5 degree C, or 2.7 F, above normal. (Source: earth.nullschool.net) And as Kevin Trenberth of the National Center for Atmospheric Research said today during a presentation I attended:

In fact, where it is warmest it is stormiest.

That's borne out by this animation (click it to watch it):

Infrared data from four satellites shows areas where cloud tops are coldest — and thus storminess is most pronounced. Note the very stormy patch northeast of Australia. (Source: Climate Prediction Center) This is a 3-day loop of infrared data from four satellites. Blues, yellows, and reds indicate very cold cloud-tops — meaning, these are areas where storm clouds have built high up into the atmosphere. Reds indicate the very coldest cloud-top temperatures — and thus the very strongest storms. Note the particularly stormy conditions northeast of Australia. This encompasses where some of the warmest Pacific waters are located. And if you look at the animation closely, you may be able to make out Winston. It's a tight little ball of red moving toward the west toward the islands of Fiji. By Saturday morning, we'll know how bad a hit Fiji took. Let's hope and pray that Winston decides to be fickle again. It wouldn't take too much of a turn to spare the most populated part of the island nation. But right now, it does not look good at all.