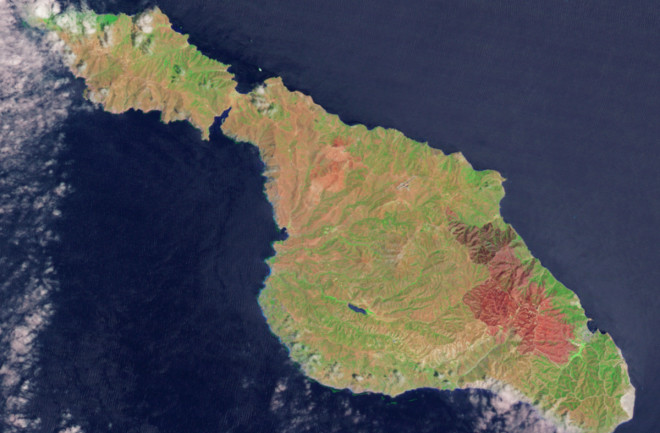 Southern California's Santa Catalina Island, as seen by NASA’s Landsat 5 satellite on May 13, 2007. The image is made from a combination of visible and infrared light to enhance the contrast between areas burned by a wildfire (dark pink), naturally bare ground (light pinkish-orange), and vegetation (green). Credit: NASA image created by Jesse Allen, using data provided courtesy of the Landsat Project Science Office, NASA/GSFC. On his radio show yesterday, Rush Limbaugh popped a cork over tentative scientific evidence that Santa Catalina Island near Los Angeles may be sinking. He excoriated the Los Angeles Times for considering it news, made fun of the scientists who conducted it — and even managed to twist himself in knots working global warming into his tirade. All the while, he ignored the fact that research like this can help scientists do a better job of determining the risks we face from potentially catastrophic events like earthquakes and tsunamis. Limbaugh focused his ire on one aspect of the research: If Santa Catalina Island is indeed sinking, it would take 3 million years for it disappear completely:

Do you realize the global warming crowd doesn't think we're gonna make it for three million more years. Stephen Hawking and the boys say we better colonize an asteroid or the moon or we're finished. Three million years and it makes the news and they can't even say it conclusively? How absurd! The whole point of this obviously is to promote the meme that the sea levels are rising.

Then comedian and now Senator Al Franken once called Rush Limbaugh a "big fat idiot," as part of a book title. But Limbaugh is no idiot. He's a zealot who calculates every word to advance his allegedly conservative political agenda. It's also clear that he interprets everything through that ideology — and that he believes everyone else is as thoroughly jaundiced as he is, most especially scientists. It's a shame, really, since the study Limbaugh bitterly criticized yesterday is part of a scientific effort to understand movements of the Earth's crust along faults in the Southern California region. And if you have any doubts as to why that is vitally important, look no further than Nepal — where sudden tectonic movement along a fault triggered a magnitude 7.8 earthquake that has killed more than 5,000 people, injured 11,000 others, and destroyed about 70,000 homes. What about this do you not understand, Mr. Limbaugh? (Evidently everything.) Santa Catalina island, seen in the false-color satellite view above, is located about 22 miles south-southwest of Los Angeles. In the study that got Limbaugh so exercised, researchers led by Chris Castillo of Stanford University, analyzed images of ancient, underwater beach terraces around the island. Their conclusion: The island is sinking very slowly, probably as a result of changes in movements of the Earth's crust along active nearby faults. (For more about the study, see this press release from the Seismological Society of America.)

Source: Geomorphology, Volume 179, 15 December 2012, Pages 208–224 Despite the 3 million year timeframe, the findings do hold significance for the present: They may provide insights into the dynamics of fault systems in this part of California and thereby help seismologists do a better job of predicting earthquake risks in a densely populated region of the country that is prone to damaging temblors. Moreover, the research turned up evidence of large underwater landslides just offshore. Should one happen again it could pose a tsunami risk to the mainland. Click on the thumbnail above for a schematic map of the major faults running off the coast of Southern California. The arrows show relative movements of the crust along those faults. Santa Catalina Island is abbreviated as SCI. It's important to point out that other research has shown that Santa Catalina Island is actually rising — and from a geologic perspective, quite rapidly — not sinking. This uncertainty provided more fodder for Limbaugh in his bitter partisan tirade. But this is a normal part of science. No single study can be definitive on an issue like this. And often it takes years and many studies to zero in on an answer. In fact, scientific paradigms that help us make sense of the world and prepare for the risks that nature flings at us are forged by long-running research, some of it contradictory. Scientists hold up their findings to intense scrutiny by their peers, who do their best to show why claims may be incorrect. And in the end, only those claims that can withstand this intense scrutiny ultimately become accepted. Until new findings offer cause for reevaluation. This is the strength of science, not its weakness. It's not something that Rush Limbaugh even wants to understand. He'd rather adopt an anti-science stance in pursuit of personal and political goals. In an editorial titled "Science Scorned", the journal Nature quoted from one of Limbaugh's broadcasts:

The four corners of deceit: government, academia, science and media. Those institutions are now corrupt and exist by virtue of deceit. That's how they promulgate themselves; it is how they prosper.

This is classic projection — Limbaugh is speaking of himself and those like him in the media and political worlds.