Running on Air: New Hybrid Does Without a Battery 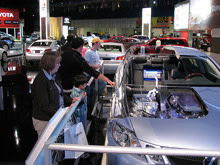 Reducing the cost of the most expensive component of any high-priced product seems the obvious way to increase its consumer demand. Swiss researchers led by engineer Lino Guzzella are working to do just that for the gasoline-electric hybrid car by replacing the battery with, of all things, compressed air. The new car, known as a pneumatic hybrid, replaces a two-liter gasoline engine with one that stores energy in compressed air, which is expected to yield a fuel savings of about 32 percent. While a conventional gas engine has enough power to accelerate quickly, it more often runs with much less power, like when it's moving at a steady speed. Guzella's engine, however, strays from that design. The small engine is sufficient for the car to cruise at highway speeds, but when extra power is needed it relies on a process known as supercharging: because the compressed air is dense, it supplies the oxygen needed to burn more fuel for a boost of acceleration. The engine also gains efficiency by capturing energy during braking, and saving energy it when the car is stopped: The compressed air can be used to restart the engine, so the car actually shut downs rather than idles the engine when not in motion. According to Guzzella, the design will add about 20 percent to the cost of a conventional engine, compared with up to 200 percent that current electric-hybrid models can tack on. "Any time you can make the same equipment do more, says one energy researcher, 'that's a good thing.'" Related Content: 80beats: Toyota Sings: Plug It in, Plug It in Better Planet: Let’s Not Forget Cars While We Freak Out About Everything Else