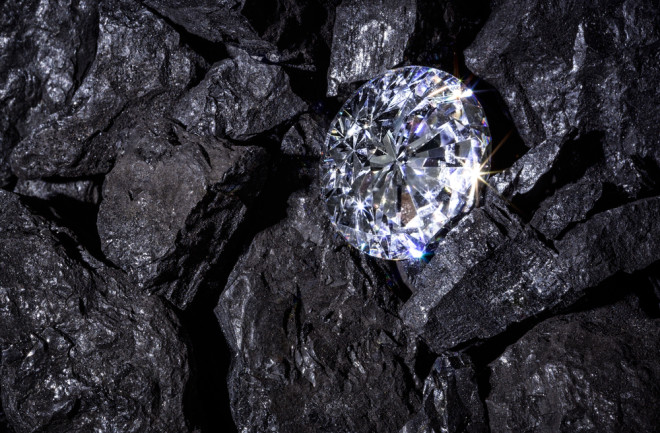 (Credit: RTImages/Shutterstock) Earth's interior is dark, but filled with diamonds. A study published Monday estimates the composition of deep rock layers known as cratons and concludes that they may be far more glittery than previously suspected. Parts of Earth's mantle may be up to two percent diamond by composition, far more than previously suspected. In terms of sheer mass, that works out to around a quadrillion, or thousand trillion, tons of diamond.

A team led by a researcher from the University of California, Santa Barbara looked at the way seismic waves travel through Earth's depths, and found that they were moving faster than expected. Analyzing seismic waves is a fairly standard way of determining the composition of our planet's interior, for the simple reason that they're one of the few things that we can detect actually traveling through it. Vibrations from earthquakes don't just travel along the surface, they move down through the body of our planet as well — and a network of seismographs around the world is listening in to every shake and shudder our planet makes. This technique is how we know the planet has a liquid core, and researchers have continued to refine our conception of the Earth's deepest regions with it. The latest insights come thanks to years of seismic data from the USGS, used to solve a persistent mystery among geologists. When the seismic waves travel through the cores of tectonic plates — known as cratons, and looking something like inverted mountains — they move faster than they should based on current models of their composition. Because we can't just go look at the 100-miles-deep cratons ourselves (the deepest hole we've ever dug didn't even get a tenth of the way), the researchers built a virtual mantle using a computer algorithm and played around with different compositions until they found one that matched up with what they were observing. The best fit, they say in a paper published in the journal Geochemistry, Geophysics, Geosystems, was made up largely of the minerals peridotite and eclogite, with a healthy sprinkling of diamond. This combination would make cratons less dense than previously thought, which would explain why the seismic waves travel faster than older models called for. The diamonds, though present at a relatively low concentration, help to stabilize the cratons, the researchers say, and also pass on vibrations extremely quickly. The deep parts of cratons, known as the roots, are also near where diamonds form in the first place, in the blazing heat and crushing pressures found deep inside the planet. Down there, diamonds may not be so rare after all — it's just difficult for them to make it to the surface and onto the rings and earrings of human beings.