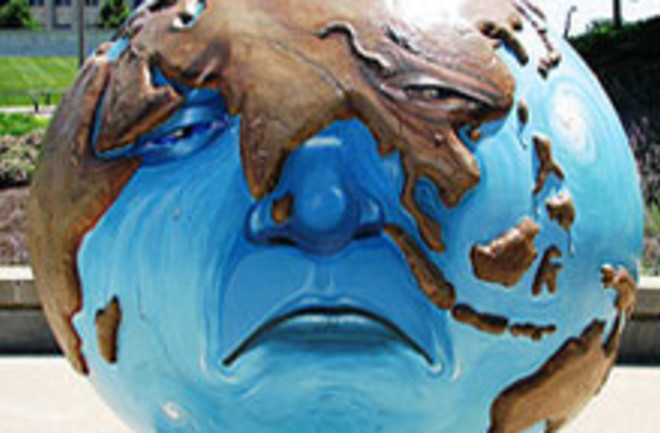 Well, it wasn't unexpected, but it's worth noting anyway. After one brief week of Senate debate over the Lieberman-Warner climate change bill, it's officially dead. Senators can now put their good intentions back on the shelf until next year, when the issue of regulating greenhouse gas emissions is expected to be raised again under a friendlier administration (both presumptive presidential nominees say they support such regulations). In this go round, Democrats couldn't gather the 60 votes needed to end a Republican filibuster and bring the bill up for a vote. In fact, the final vote was 48-36, short of a majority, but Democrats had letters from six absent senators (including Barack Obama, John McCain, and Ted Kennedy) saying that they would have voted for the policy had they been present.

"It's just the beginning for us," proclaimed Sen. Barbara Boxer, D-California, a chief sponsor of the bill in the Senate, noting that 54 senators had expressed support of the legislation, although that's still short of what would be needed to overcome concerted GOP opposition. "It's clear a majority of Congress wants to act," Boxer said at a news conference [AP].

The debate was notable not for the seriousness with which the legislators confronted the issue of global warming, but rather for the amount of squabbling and petty partisan tricks it occasioned. In one exchange on the Senate floor, Senator John Kerry tried to break into Senator James Inhofe's long speech decrying the bill. After being rebuffed a fourth time, Mr. Kerry was exasperated. “With all due respect,” he said, “we are here to have a debate. It is hard to have a debate when you are talking all by yourself.”

Even for the Senate, where members are well-known to prefer talking to listening, the amount of unilateral jabbering on the climate bill has been remarkable, with lawmakers both for and against it arguing repeatedly over how much time was allotted for them to speak [The New York Times].

The Republican leader, Mitch McConnell, also demanded that the entire 492-page document be read aloud into the record on Wednesday, a maneuver that sent senators scurrying from the floor for nine hours, only to be forced to return after 10 p.m. for a late-night quorum call. The debate that did occur showed a stark disagreement on the economic costs of cutting back greenhouse gas emissions. The bill would have required major emitters such as power plants, refineries, and factories to buy emissions permits in a cap-and-trade system. Republicans complained that the measure would saddle the U.S. economy with higher energy costs, which could hurt businesses and ultimately would be passed on to consumers.

Democrats of course disagreed, saying that costs would be reduced as the country shifted towards renewable sources of energy and put a new emphasis on efficiency. But for some observers, even the substantive moments of debate just recalled the scope of the problem, and how little the United States has done to address it.

In the first three days of the debate on the bill, according to my rough calculation, about 246 million more tons of carbon dioxide flowed into the atmosphere from human activities worldwide. Something like half of that will still be aloft in a century [Dot Earth blog, The New York Times].

Across the world, some other people have even more reason to be annoyed about the general inaction on global warming. The president of the Republic of Kiribati, a collection of atolls and coral reef island in the Pacific, told an international audience yesterday that he believes his citizens will have to leave their homes within the century due to rising sea levels.

"We may already be at the point of no return," he said [Nature News].