Reclaiming the Segway from Toolness

I should admit here I have not been a Segway believer. Ever since I saw Will Arnett straddle one on Arrested Development I have not been able to understand any possible use of the machine other than comic prop. I realize now that this was slightly unfair. 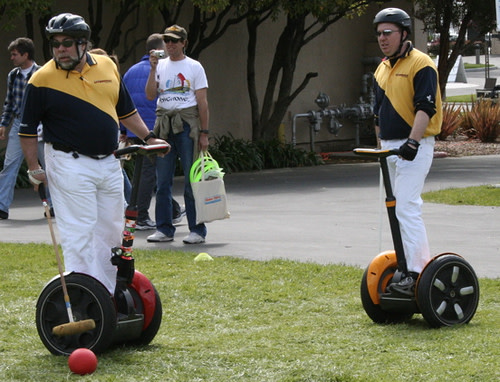 A British MP just defied possible arrest to lead a charge of Segwayists through London, trying to get the Department of Transportation in England to clarify whether they're legal to drive on roads or not. He points out that in a dense urban area, they go faster than the average speed cars are able to move in traffic, and emit virtually nothing. I guess my confusion is still this: They go 12 mph. Doesn't a bicycle go that fast? But I guess if you don't want to get your suit sweaty... I forget that people still go to offices in suits.