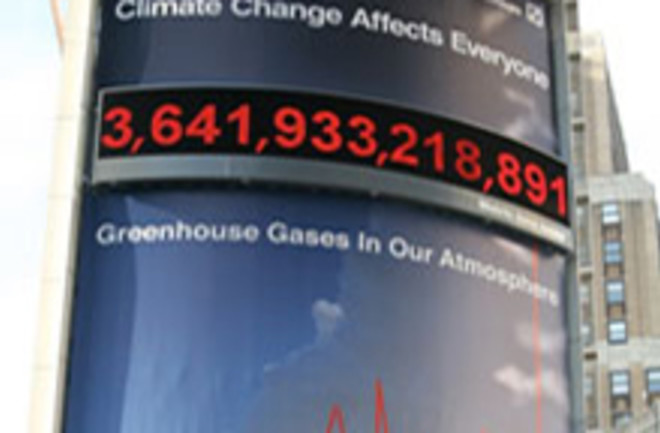 Curious how much carbon the atmosphere contains at this moment? Look no further than a giant "carbon counter" first switched on yesterday morning near New York City's Pennsylvania Station. The 70-foot-tall screen, lit by digital low-energy LED, displays in real time the amount of greenhouse gases present in the atmosphere--and therefore gives some indication of how much trouble humanity is facing from global warming. People outside of New York, don't despair: The constantly scrolling numbers can be viewed at the project's Web site as well. The numbers shown are based on measurements developed at the Massachusetts Institute of Technology and include all the long-lasting greenhouse gases in the 1997 Kyoto Protocol, which was established at the United Nations Framework Convention on Climate change

. The clock, which is illuminated 24 hours a day, is also environmentally friendly. It

The counter is a project Deutsche Asset Management, a branch of Deutsche Bank that invests in industries that mitigate or adapt to climate change. The carbon counter is only blocks away from another ominous sign.

At 44th Street and the Avenue of the Americas, a giant billboard ticks upward to mark the growing national debt. During its 20-year run, New Yorkers have watched the numbers race from $2.7 trillion to $11.4 trillion. And it keeps on ticking [The New York Times, blog].

As of today, the sign clocks more than 3.6 trillion metric tons of greenhouse gas in our atmosphere. Says Kevin Parker of Deutsche Bank:

"We hope with this sign that it is going to foster a sense of urgency about the problem, raise public awareness, create a need for education and really spur a call for action