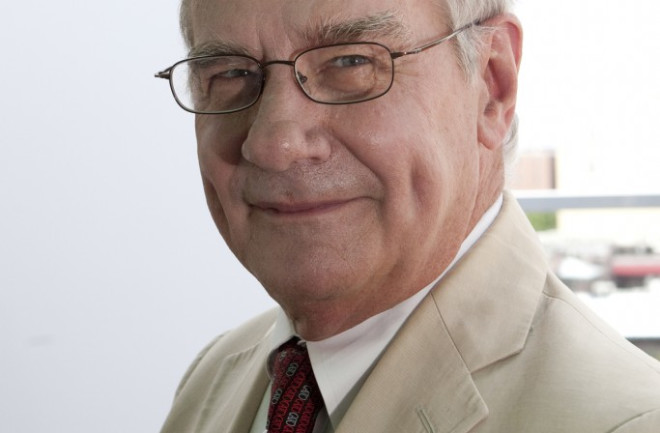 Patrick Michaels, Director of the Center for the Study of Science at the Cato Institute. (Photo courtesy Cato Institute) In a comment on an August 3rd post at the Wattsupwiththat website, Patrick J. Michaels of the conservative Cato Institute said that there has been a "hit list" apparently targeting climate scientists, and that he had influence over who was on it. At this point, it is unclear exactly what this list was about. But from what Michaels said, it looks like it consisted of scientists being targeted for termination from their jobs.

See the update below about an effort by ExxonMobil in 2001 to get the Bush Administration to oust Robert T. Watson as chairman of the Intergovernmental Panel on Climate Change | Considering the salience of global warming in the presidential election, and the unsettling nature of these comments, I decided to depart from my usual coverage of the science of our planet here at ImaGeo and try to shine a light on this. Michaels, past president of the American Association of State Climatologists, and current Director of Cato's Center for the Study of Science, is one of the most highly quoted doubters of mainstream science on climate change. The Wattsupwiththat post to which Michaels responded concerned an announcement that Thomas Karl, director of the National Centers for Environmental Information, was retiring. NCEI is the part of NOAA that releases monthly updates on the global climate. The post by Anthony Watts at the Wattsupwiththat website did little more than reproduce a copy of the press release announcing Karl's retirement. Then, on Aug. 4th, Michaels wrote his response in the comments section of the post. Rhetorically addressing Karl, Michaels said:

I saved your job in 2000. You were on a hit list and I had you taken off because I thought you were a straight shooter. Seven months later what is detailed above happened.

Screenshot of Patrick Michaels' "hit list" comment on Wattsupwiththat Click on the image at right to see a screenshot of Michaels' entire comment, including what he says convinced him that Karl was not a "straight shooter." In those comments, Michaels alleges that Thomas Karl engaged in unethical scientific behavior. I called the Cato Institute earlier this morning to ask for elaboration from Michaels on this. I have not received a response from him yet; if and when I do, I will update this story. I have also contacted several prominent climate scientists to get their responses. Given that Michaels says he "saved" Karl's job by taking him off "a hit list" in the year 2000, this could have had something to do with the incoming George W. Bush administration. Bush, a Republican, took office on Jan. 20, 2001. In response to a National Academy of Sciences study finding that global warming was occurring due to human activities, President Bush said not long after taking office:

My goal in writing this post is to get to the bottom of a number of important questions raised by Patrick Michaels' comments: Did this "hit list" consist of names of government climate scientists that Michaels and others were recommending for termination? If so, on what grounds were people included on the list? Who compiled the list? Who asked that it be compiled? Was it politically motivated? Were people fired as a result of the list? |Update, Aug. 8: Since I wrote this post, a colleague reminded me of an effort by ExxonMobil in 2001 to get the Bush Administration to oust Robert T. Watson as chairman of the Intergovernmental Panel on Climate Change. Watson, a prominent and highly regarded atmospheric chemist, was chief scientist of the World Bank. In a memo sent to the White House on Feb. 6, 2001, Arthur G. Randol III, senior environmental adviser for ExxonMobil, asked: ''Can Watson be replaced now at the request of the U.S.?'' The administration did not wind up supporting Watson for the IPCC chairmanship. Instead, it supported Rajendra K. Pachauri, who went on to become chairman. Does this episode have any connection to the hit list described by Michaels? Both occurred toward the start of the Bush Administration. But there is no real evidence for any connection right now. All we have is what Michaels wrote on the Wattsupwiththat website. Even so, this episode does provide a glimpse at an effort by an industry that has supported Michaels (see below) to have a prominent climate scientist ousted from his position — and a positive response from the administration at the time. |

This graph was compiled by the National Centers for Environmental Information, which has been directed by Thomas Karl. It shows how annual global temperatures have varied from the long-term average since 1880. (Source: NOAA) Given the upcoming presidential election, another important question comes to mind: Is such a "hit list" being prepared in the event that Donald Trump wins? The Republican candidate has said that global warming is a concept invented by the Chinese to make the United State uncompetitive. He also decried spending money on what he called 'the global warming hoax." Patrick Michaels actually does not deny that the Earth is warming and the climate changing, thanks in part to human influence. The title of his most recent book, an e-book co-authored Paul C. Knappenberger and published in October of 2015, sums up his position on the subject: "Lukewarming: The New Climate Science that Changes Everything." According to the blurb for the book on the Cato Institute website, Michaels and Knappenberger argue that global warming "is real, and partially man-made," but that it "is more lukewarm than hot." Michaels has admitted that a large portion of his support has come from industry. During a segment on CNN in 2010, he was asked how much of his research funding came from the fossil fuel industry. His answer: "I don't know, 40 percent, I don' t know." He also has argued that climate scientists whose research is supported by government grants may be corrupted by their funding source. Here's an excerpt from a column he wrote for National Review about a conference convened by Pope Francis to explore the moral dimensions of climate change:

The conference also has a moral duty to examine the corruption of science that can be caused by massive amounts of money. The United States has disbursed tens of billions of dollars to climate scientists who would not have received those funds had their research shown climate change to be beneficial or even modest in its effects. Are these scientists being tempted by money? And are the very, very few climate scientists whose research is supported by industry somehow less virtuous?

Michaels is arguing that government-funded scientists may be corrupted by the source of their support. If he believes this, wouldn't that also mean that he is potentially corruptible by the funds he receives from industry? And what does his comments about the "hit list" suggest about his virtuousness? Right now, I have more questions than answers. I'll do my best to change that, and I'll present the answers I come up with when I get them.

Note: I've seen only one other published piece about this. It's at the Rabett Run blog. You can find it here.