'Our planet is a mess because of you people!'

I looked back at the woman next to me in disbelief; a mid-forties Greenpeace Director. It was June 2006 and we had been chatting a few minutes as the plane taxied on the runway. She began by telling me about her journey to activism. A literature major in college, she felt a longing to do more to save the environment. In the early 90's she joined Greenpeace and rose to a Director over time. Finally she asked what I did. 'I work in the Senate on ocean, energy, and environment...' That's where she cut me off.

'Our planet is a mess because of you people!' 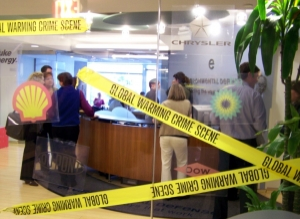 The thing is, up until then I imagined we were on the same team, but she stopped me before I could get to the part about being a marine biologist in conservation. I hadn't had a chance to tell her of projects with The Nature Conservancy or work toward establishing Marine Protected Areas in Bonaire. She didn't know about my time with the Center for Biodiversity and Conservation at AMNH or the industry folks I worked with in Maine to protect fisheries. Further, she hadn't a notion why I came to DC; I was a John Knauss Sea Grant Fellow--a program that places ocean scientists in key offices to inform legislative decisions. The goal was to develop an understanding of the way policy is crafted and contribute where possible. We sat beside each other, but I listened to The Police most of the trip. I was on my way to the 20th Annual Meeting for the Society for Conservation Biology in San Jose. She was too, but I hadn't had the chance to tell her. And in the end, I didn't care to. She may have been a compassionate individual with good intentions, but she never listened. Instead, she only judged. The experience stays with me. Activism is important, but it must be informed and battles have to be chosen carefully. Otherwise, irrational idealism undermines progress. Small steps in conservation may not go as far as some would like, but by throwing sand in the gears, we go nowhere.