Geysers gush massive columns of hot water and steam from fissures in the ground, offering a rare look at the earth’s inner workings.

The best place to see geysers is in Yellowstone National Park, where more than half of the 1,000 or so active geysers in the world (including Castle Geyser, pictured) feed off the heat of an enormous subterranean volcano. The activity begins deep in a geyser’s underground plumbing (video), where high-pressure water boils, sending bubbles up through a narrow column of water within the overlying rock. The bubbles eventually gain enough force to push some water out of the spout, decreasing the pressure on the deeper water and causing it to boil even more furiously. The result is an eruption that can rise hundreds of feet in the air. In recent years, researchers have applied their understanding of geysers to endeavors as diverse as clean energy and planetary science. 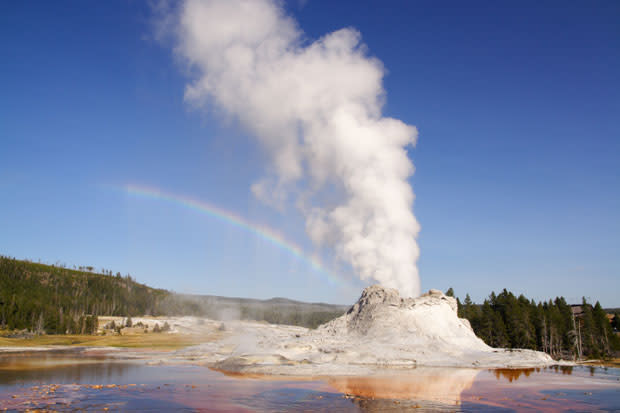 HOT HOT HEAT ENERGYWater ejected by geysers can be as hot as 400 degrees Fahrenheit. Some engineers are hoping to tap into that buried thermal energy and convert it to electricity. In Decem­ber, power company Crump Geothermal began drilling wells around a geyser in southern Oregon. Crump believes that the geyser’s underground reservoir could support a 30-megawatt plant capable of powering 30,000 homes.

QUAKE MAINTENANCEGeysers tend to die out because mineral buildup clogs their nozzle﻿. The geysers in Yellowstone are so active partly because frequent earthquakes shake loose the debris as quickly as it accumulates﻿. In early 2010, seismologists measured more than 1,700 minor quakes in less than three weeks.

CLOUDY WITH A CHANCE OF ERUPTIONYellowstone’s Old Faithful geyser is famous for its near-clocklike regularity, but scientists with the U.S. Geological Survey recently determined that annual precipitation influences the overall frequency of eruptions in Yellowstone: The more it rains and snows nearby, the more often the geysers pop. The geologists think that geysers depend on surface water to seep down and build up pressure in the groundwater supply.﻿

PLUMES IN SPACE NASA scientists at the Jet Propulsion Laboratory in Pasadena have used the mechanics of Old Faithful to try to explain the gigantic plumes of gas and ice crystals, appropriately known as “Cold Faithful,” on Saturn’s moon Enceladus. Like their terrestrial counterparts, the icy geysers spout gas-charged fluids from an underground chamber. The scientists hope to find out whether that chamber contains liquid water, making it a potential hotbed (so to speak) for life.

HealthWhat Is Hydroxychloroquine and Does It Treat COVID-19?