The Democrats have been gradually retreating from their anti-off-shore-drilling stance ever since polls started to indicate that drilling is a winning issue for the GOP. Now they're transitioning into all-out surrender. The bipartisan "Gang of 10" congresspeople pushing for an energy bill that includes off-shore drilling has become the Gang of At Minimum 20. Even Pelosi has said she'll let the oil companies drill near the southeastern US (far from her own California). 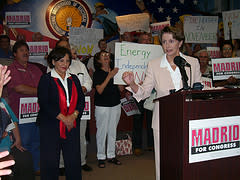 Pelosi has also been trying to find a way to partially salvage this apparently FUBAR piece of legislation. And she is being appropriately sneaky in her proposed compromise. Which is: in return for the ability to excavate for oil off-shore, oil companies have to contribute billions to the development of non-oil energy sources (wind, solar, etc). That allows America to try to fuel itself insofar as possible, but still forces Big Oil to contribute to its own obsolesence. And the GOP can't really oppose that aspect of a bill without looking completely in the pocket of Big Oil. Has that ever stopped them? Not that I know of. But it will at least force them to take the bait and lose face.