The chilly island is famous for its lack of trees. It may have lost much of the foliage about 1,000 years ago thanks to Norse inhabitants. 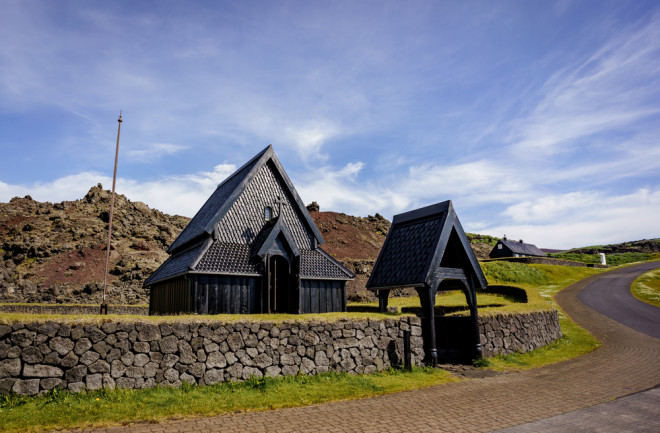 As it turns out, Norse occupation of Iceland might have been transformative enough to dampen wildfires on the island.

A research team analyzing an ice core extracted from the region found that chemical signatures of wildfire dipped around the time Norse communities settled on the landmass, which to this day is curiously devoid of trees. This July, they published their findings in the journal Climate of the Past.

“You can still see what the early forest might have looked like in places like Fnjóskadalur or Ásbyrgi,” says Kathryn Catlin, an anthropological geoarchaeologist at Jacksonville State University who wasn't involved with the study. But this summer's report on ice core records could add further evidence to something researchers like Catlin have known for a long time: “The Norse people dramatically changed the landscape,” she notes.

Learning how the Norse modified their surroundings, the study authors say, provides helpful context for understanding what kind of environmental impacts that tree-eradicating activities might bring about today.

Getting to the Core of It

“Ice core statuses are closely related to human history,” says Delia Segato, a paleoclimatologist at Ca' Foscari University of Venice and co-author on the recent Climate of the Past study. Pulling out segments of soil (or ice) that reach into the ground can reveal layers of history — chemicals in the atmosphere can deposit on land and slowly accumulate into a chronological record. Roman economic activity, for example, has been approximated through ice core extracts. The civilization churned lead into the atmosphere while minting coins and the particles deposited in Greenland ice into stacked levels, mimicking the empire’s financial fluctuations.

By inspecting cylinders of material extracted from deep underground, researchers already knew that the Norse people had eliminated plenty of trees. Though Icelandic sagas reference an early landscape covered in forests, scientist have sought concrete proof of those long-gone trees by pulling vertical cores of sediment from bogs and lake beds, Catlin explains. More specifically, examining samples for tree pollen illustrates an unusual historical shift. “What this shows, from all over Iceland, is a dramatic drop in tree pollen and a corresponding increase in grasses and sedges, right around 1,100 years ago when the Norse were arriving on the island,” Catlin says.

So when Segato and her colleagues gained access to an ice core that an international group of researchers pulled from an ice cap in eastern Greenland, they decided to see what other signals of Norse activity were hiding within the frozen water.

The team looked specifically for compounds that are released into the air during a wildfire such as black carbon, a byproduct of burning fossil fuel and plant life, and levoglucosan, which appears when plants' cell walls go up in flames. The fingerprints of fire are airborne, which explains why the researchers could seek signs of Icelandic burns in Greenland-sourced ice: Wind movement patterns in the region likely whisked emissions from the Icelandic coast into Greenland, where they were trapped in the ice cap, the team concluded.

Melting the portion of the ice core corresponding with Norse occupation and measuring levels of the selected fire markers showed that wildfire prevalence dipped somewhat when the Norse people arrived.

To make sure the drop in fire markers wasn’t due to a broader phenomena such as a significant climate shift, the team also examined levels of the same compounds found in other cores. These included an ice extract from northern Greenland that holds fire residues blown in from North America, says Andrea Spolaor, a paleoclimatologist at Ca' Foscari University of Venice who co-authored the paper.

But the drop in chemical signatures in the Greenland ice core appeared distinct. “This means that the signal we are looking for is something new,” Spolaor says. If the reduction in forest fire residues in Iceland didn’t come from global climate fluctuations, then it likely resulted from human activity, Spolaor says — namely, the Norse people cut down so many flammable materials that forest fires became less frequent.

It’s hard to say if, relative to their era, the Norse were unusually destructive in their new environment, Catlin says. Unlike most other parts of the world, Indigenous communities hadn't inhabited the island before the Norse arrived. The sudden arrival of humans makes it easier to determine exactly how the presence of a somewhat industrialized Middle Ages society could warp a landscape. “There is no easy comparison to be made between the impact of Norse agriculture in Iceland and the impact of similar technologies in Scandinavia or the rest of medieval Europe,” Catlin says, “because those environments had already by that time adapted to human impacts over many millennia.”

Similarly, it’s hard to gauge whether the consequences of deforestation 1,000 years ago will repeat in our current age of mass tree removal. Though parts of the world continue to chop down forests for further land development, trees regularly blaze as global warming progresses, Spolaor says.

And even if the past events in Iceland aren't an exact predictor of what will transpire as climate change and land development progresses, those major shifts still offer helpful insight for today. “The climate of the past in general relates perfectly to what is happening now,” Segato says, “because otherwise, we would not understand how dramatic these changes are.”