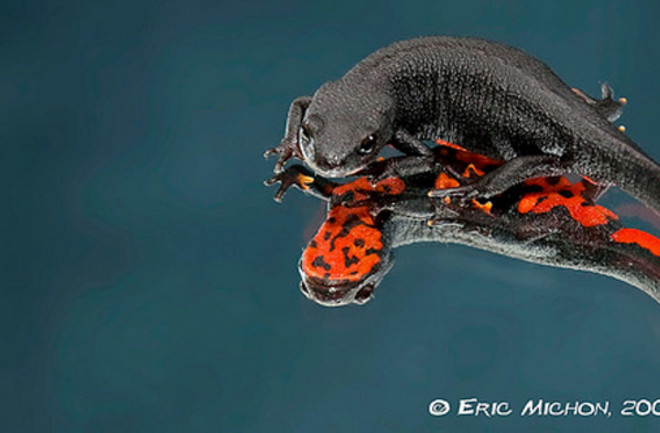 Gouge out my eyes, and I would be permanently blind.  Cut off my limbs, and I would flop on the ground (although, I’d try to bite your legs off). But a newt would have no such problems. These small creatures are masters of regeneration. If they lose a limb, they grow new ones in a few months. They can regenerate parts of their tails, jaws, ears, hearts, spines, eyes and brains.

Now, Goro Eguchi has shown that a newt’s healing powers don’t diminish with age. As long as they live, they retain the ability to efficiently regrow their body parts (or at least, the lenses of their eyes), even if they have to do so over and over again.

We’ve known about the abilities of newts and other salamanders for over 200 years, thanks initially to Lazzarro Spallanzini, an Italian biologist and Catholic priest. But the limits of this ability have been unclear. Spallanzani once amputated limbs from a salamander six times over three months, and watched them grow back. One of his colleagues, Charles Bonnet, did a similar experiment eight times.

The salamanders could repeatedly regrow their limbs, but eventually, abnormalities crept in. For example, the animals would occasionally develop missing bone structures. Both Spallanzani and Bonnet (and, indeed, Charles Darwin after them) held that newts regenerate their body parts less efficiently as they get older, especially if they accrue repeated injuries.

But Eguchi thinks that these experiments, while historically important, were also flawed. The exposed stumps of the severed legs would have been exposed to the messy environment, which might have scuppered a clean regeneration.

To truly test the extent of these animals’ powers, Eguchi set up a 16-year-long experiment. In 1994, he collected several Japanese fire-bellied newts (Cynops pyrrhogaster) and successfully kept them in captivity. During that time, Eguchi periodically anaesthetised the animals and carefully removed the lens from their eyes. The surgeries involve a small nick to the cornea that quickly sealed, creating a protected environment where the lens could regenerate without any influence from the outside world.

This happened 18 times in total. Eguchi found that the 17th and 18th lenses were exactly the same as the original ones, and those from untouched newts of the same age. They were the same size and equally transparent. They grew back with equal speed. They had the same structures under the microscope. They even had a similar suite of active genes, including crystallin genes that produce the major protein of the lens, and other genes that control how crystallins are activated.

Eguchi estimated that his newts were at least 14 when they were collected, which would have made them 30 by the end of the experiment. That’s as long as fire-bellied newts have ever been kept in captivity. These repeated surgeries show that, contrary to previous belief, even the oldest newts can regenerate their lens as well as young ones, with no obvious flaws in the finished product.

Perhaps the newts have some way of protecting their cells from the mutations that accumulate with age; indeed, Eguchi found that none of his newts ever developed cataracts. His next step is to understand how newts keep their regenerative potential in their ageing tissues, in a bid to apply that knowledge to human medicine. The ability to replace old and damaged tissues is a seductive one and Eguchi writes, “Our findings... are of paramount importance to the field of regenera­tion and ageing.”

That may be overly optimistic. Scientists have studied amphibian regeneration for 200 years, with no discernible impact on medicine yet. Indeed, way back in 1769, Spallanzini himself asked, “If [amphibians] recover their legs... how comes it to pass, that other land animals, at least such as are commonly accounted perfect, and are better known to us, are not endued with the same power? Is it to be hoped they may acquire them by some useful dispositions?” His dated idea of perfection notwithstanding, it’s telling that answers to his questions have been slow to arrive.

That’s largely because newts and other salamanders are difficult creatures to work with. Panagiotis Tsonis, who was involved in the study, says, “Despite the amazing capabilities of the newts and the fascination about the process, the big obstacles so far were (and remain) the lack of resources and genetics in the newt.”

This is a broad problem for the regeneration field: animals that re-grow their limbs with ease cause big difficulties for geneticists (a good review here). Newts, for example, are difficult to keep and breed in captivity. And while geneticists can alter the genes of flies and mice with ease, it takes years to achieve the same results in newts.

However, Tsonis’s group have been working hard to fix this problem. They have developed ways of quickly switching off genes in newts or adding new genes. “We and others have invested a lot of effort to develop these techniques. Many important questions can now be addressed to understand why newts do what they do and how to apply it to regenerative medicine. After all this animal does everything that regenerative medicine seeks to achieve!”

An entire flatworm regenerated from a single adult cell