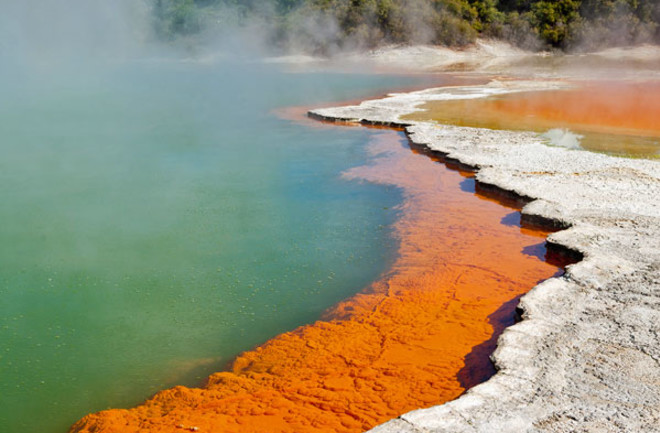 The colorful Champagne Pool at the Waiotapu geothermal area is a toasty 163 degrees.  | Dmitry Naumov/Shutterstock

Beneath New Zealand’s snow-dusted peaks and placid blue lakes, the planet is restless. The island nation sits atop an active subduction zone where the Pacific Plate slips below the Australian Plate. In the Central North Island, in a wedge-shaped region called the Taupo Volcanic Zone, tectonic forces stretch Earth’s crust dramatically. Elsewhere on our planet, continental crust has an average thickness of about 24 miles. But in the TVZ, it can be less than 10 miles thick. That thin skin gives researchers and tourists alike an unparalleled look at geologic forces.

“We have some of the best geophysical surface features in the world,” notes Brad Scott, who has worked in the TVZ since 1974 as a volcanologist for GNS Science, a geoscience research service.

From his home in Rotorua, where the sulfurous smell of geothermal activity is always in the air, Scott lists tantalizing sites to visit: “It’s a very active volcanic area, with frequently active cone volcanoes such as White Island, Ruapehu and Ngauruhoe, all of which are easy to access. And it’s home to some of the world’s best examples of caldera volcanoes. We have many large-scale geothermal systems: hot pools, springs, geysers. Lake Taupo is hiding the world’s largest caldera volcano of the past 2,000 years.”

Photogenic Mount Ngauruhoe starred as Mount Doom in The Lord of the Rings movies.  | Jiri Foltyn/Shutterstock

The entire TVZ stretches more than 200 miles north to south, from the smoldering submarine volcano known as White Island to the stately Mount Ruapehu in Tongariro National Park. Most of the sites, however, are grouped between Tongariro and the resort town of Rotorua, about a two-hour drive to the north. The Volcanic Activity Center (www.volcanoes.co.nz) in the town of Taupo is centrally located in the TVZ. It provides an excellent primer on New Zealand’s long history of big shakes and bigger eruptions.

The Crown Jewel of Craters

Often called the most beautiful day hike in the world, the 12-mile Tongariro Alpine Crossing gets visitors up close and personal with three volcanoes and a jaw-dropping assortment of hot springs, acidic lakes, steaming fumaroles and multicolored lava from past eruptions (tinyurl.com/tongarirocrossing).

Rotorua draws tourists to its famous hot springs, but for visitors who prefer science to spas, the nearby volcanic rift valley Waimangu (www.waimangu.co.nz) is a must. The geothermal park was created in 1886 when nearby Mount Tarawera erupted in spectacular fashion. Self-guided walks and hikes through the valley include visits to Frying Pan Lake, the world’s largest hot spring, and the mysterious Inferno Crater, with cyclic water-level fluctuations that have flummoxed geologists.

The area around Tongariro National Park and Taupo includes a number of nonvolcanic sites of interest, including the National Trout Centre (troutcentre.com), which highlights freshwater management, and the outstanding National Army Museum (armymuseum.co.nz).

Fans of The Lord of the Rings movies can geek out at several locations in Tongariro National Park, which stood in for the shadow lands of Mordor during filming; photogenic cone volcano Mount Ngauruhoe had a starring role as Mount Doom. Get a list of all LOTR locations in the country at New Zealand’s Department of Conservation page (www.tinyurl.com/lotrlocations).

While many Americans worry about the explosive potential of the rhyolite supervolcano under Yellowstone, Kiwis take a typically more laid-back view of their resident rhyolite monster. “One school of thought about the TVZ is that it’s one larger, supervolcano system, as big or maybe even bigger than Yellowstone,” says Scott. “But the return period for the ‘super-eruptions’ are thousands of years apart, not in the next three to five years.”

The colorful Champagne Pool at the Waiotapu geothermal area is a toasty 163 degrees.  | Dmitry Naumov/Shutterstock

While a super-eruption during your visit is highly unlikely, the TVZ is still hoppin’, volcanically speaking. Part of the Tongariro Crossing was closed for months after localized eruptions in 2012. Check GeoNet (www.geonet.co.nz) for activity alerts, and take warning signs about geothermal hazards in the area, including hot springs and likely lava flow zones, seriously.

Mount Ruapehu’s ski fields are popular in winter, but the TVZ’s impressive geology is best observed during the hiking season, November through April. Public transportation throughout the year is limited. Your best bet is to rent a car or campervan. The nearest international airports are about a four-hour drive to the south (Wellington) or to the north (Auckland).

Both the Department of Conservation (doc.govt.nz) and Tongariro Natural History Society (tongariro.org.nz) offer seasonal educational programs and volunteer opportunities to immerse yourself in the TVZ. Hiking enthusiasts who want more than a day at Mount Doom can choose from a number of long-distance treks through Mordor.

[This article originally appeared in print as "Taupo Volcanic Zone."]