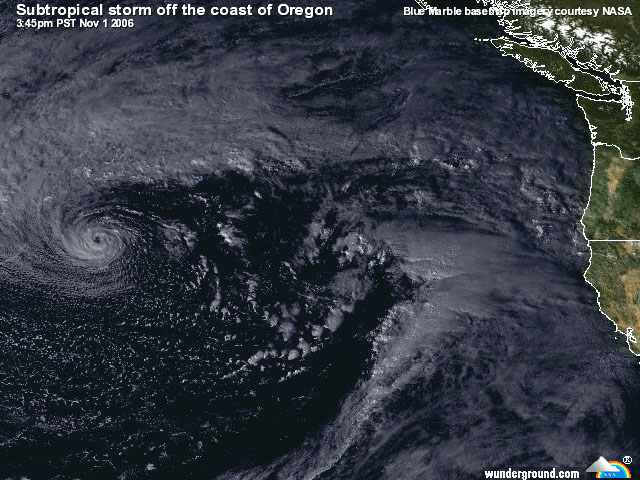 The infamous "Thingamabobbercane" off the coast of Oregon last November.

I'm excited to say that my book is reviewed today in the Sunday Times Book Review, available online here. I think it would be fair to call the review itself lukewarm (not quite warm enough for storm formation, let's say). The reviewer, Lisa Margonelli of the New America Foundation, seemed to want a repeat of The Republican War on Science. Most of the Times review attempts to recap the book, but because we don't blanch from it at the Intersection, here is the paragraph of criticism:

Mooney has written a well-researched, nuanced book that suffers from poor organization and a lack of pizazz. This is a contrast with his previous book, "The Republican War on Science," in which he juggled extensive research and sharp arguments the way chefs at Benihana toss big knives -- with precision and a showman's wink that made his unpromising subject fun. In "Storm World," Mooney makes us wait until the end of the second appendix before revealing the "Thingamabobbercane" -- an "oddball cyclone" that formed off the coast of Oregon last November.

I knew I should have said more about the "Thingamabobbercane." The kids just love that wacky cyclone. Anyways, as you can see, the Times review is mixed and more critical than other reviews of Storm World have been. For a sense of the full range of reviews so far, probably the best link is here.

P.S.: ScienceBlogs' Kevin Beck just reviewedStorm World, and as a Floridian has a lot of hurricane experience. He seems to have really enjoyed the book....