Human-caused warming is popping the frozen corks that normally bottle up thick sea ice in the Arctic Ocean, allowing it to pour south

NASA's Aqua satellite captured these two views of different sea ice conditions over the Lincoln Sea, a part of the Arctic Ocean north of Greenland and Ellesmere Island. Breakup here happened much earlier than usual in 2017, allowing huge volumes of thick sea ice to pour south through a narrow passage and ultimately into the North Atlantic Ocean. (Images: NASA Worldview. Animation: Tom Yulsman) Ships plying the North Atlantic Ocean in spring are facing increased hazards from floating Arctic sea ice as a result of human-caused global warming. That might seem counterintuitive, but here's what's happening, according to a new study published in the journal Geophysical Research Letters: Warming temperatures are causing ice that normally blocks narrow ocean passages in winter and spring to break up earlier than in the past. Like a cork removed from a champagne bottle, the early break up in these passages is allowing thick, old sea ice to flow south from the Arctic Ocean into the North Atlantic, choking areas used by fishing, shipping and ferry boats. "Heavy ice conditions along Canada's east coast during spring 2017 presented hazardous conditions for the maritime industry at a time of year when vessels typically do not need to contend with sea ice," the researchers note in their paper. As warming has caused Arctic sea ice to shrink and thin overall:

. . . it has become increasingly mobile. This has contributed to increased ice transport through narrow channels along the periphery of the Arctic Ocean . . . and increased the presence of thick multiyear sea ice from the High Arctic at more southern locations that have typically not contended with such sea ice.

I created the animation above to show what this looks like from orbit. It consists of images centered over the Lincoln Sea, part of the Arctic Ocean — both acquired by NASA's polar-orbiting Aqua satellite. The image acquired on June 28th, 2015 shows the Lincoln Sea, and the Nares Strait between Greenland and Canada's Ellesmere Island. Even in early summer, the area is choked with ice. Compare that with the image captured on May 25, 2017. Ice in the Lincoln Sea has already broken up, and bergs are pouring to the southwestward through the strait. https://youtu.be/CwtNhr4QVDs The video above, consisting of data from the European Space Agency's Sentinel 1B satellite, shows the evolution of sea ice in the area between the fall of 2016 and spring of 2017. To my eye, it looks like ice pours through the Nares Strait almost through the entire period. 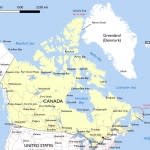 Source: Mapswire, CC BY 4.0. "It’s counterintuitive to most people, because it means you can have an increase in local ice hazards because of a changing climate in the high Arctic," says the University of Manitoba's David Barber, lead author of the study, quoted in a release from the American Geophysical Union. "This is something we need to better prepare for in the future, because we expect this phenomenon to go on for at least a couple more decades as we transition to an ice-free Arctic in the summer." In the past, southward flow through narrow channels like the Nares Strait has been delayed until well into summer, thanks to features known as "ice arches." 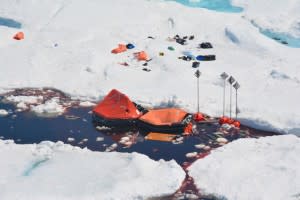 Lifeboats, debris and fishing gear are seen at the site where a fishing vessel sank near Newfoundland in 2017 after becoming trapped in thick sea ice. The vessel’s crew was rescued by the Canadian research icebreaker Amundsen. (Source: David G. Barber) Previous research has shown that reduced formation of these natural corks has allowed increasing amounts of ice to flow from the central Arctic and Lincoln Sea into Baffin Bay. The new study extends this body of research, showing that sea ice found around Newfoundland in May and June 2017 likely formed in the Lincoln Sea, 1,800 miles to the north. According to the American Geophysical Union, which published the study:

The unusually thick ice cover took ships by surprise. The ice was much thicker than usual – up to 8 meters (26 feet) thick in some cases. Off the Newfoundland coast, an unprecedented number of ships, fishing vessels and ferry boats became trapped in the ice. In early June, the Canadian coast guard pulled the research icebreaker Amundsen off its scientific expedition to escort ferries caught in the congested seas to open water, and conduct search and rescue operations for stranded passengers of ferry boats and ships trapped in the ice, as it was the only large icebreaker available at the time.

EnvironmentNASA: Last Month Was Earth’s Warmest May on Record
Recommendations From Our Store