Steve Jobs emphasized in a presentation today that the new iPod Nano is the "cleanest" ever; it contains lower levels of arsenic and other toxic substances, and it's composed of "easily recyclable" materials. 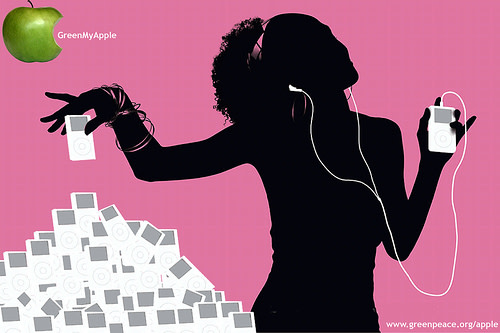 This is nice, and represents part of Apple's response to Greenpeace's longstanding complaints against its mediocre enviro record. (This is one of their anti-Apple posters). But it does raise a couple questions: first of all, isn't the most impactful thing about iPods that they keep coming out with new models? So that you don't hold on to your expensive piece of electronics for more than a year? Second, containing "easily recyclable materials" isn't the same as "recyclable." I don't know about the recycling chart in your city, but in mine, chrome things don't appear to go into the blue bin. Somewhere at MIT, consciencious students may be disassembling iPods before they throw them out, dividing their components into tiny recyclable and non-recyclable piles. But I bet most of those easily recyclable materials aren't getting recycled. Unless they're being passed on to parents, homeless people, etc when a new model comes out. Image: Greenpeace