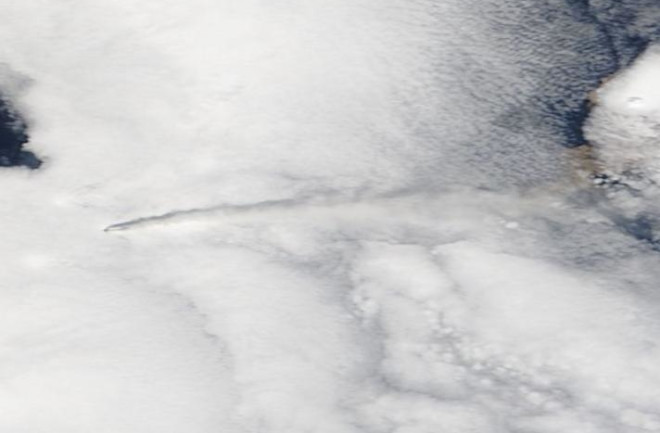 As seen by NASA's Terra satellite, a plume of gas, steam and ash erupts from Cleveland volcano below the cloud deck in Alaska's Aleutian Islands chain on May 4. (Image: NASA) There's something about the way this eruption plume from Cleveland volcano is piercing the cloud deck that really caught my attention. Rising 5,676 feet right up from the sea in the Aleutian Island chain, the volcano experienced an explosion at 5:00 AM local time on May 4, and then began erupting at a low level. The plume seen in this image is streaming to the east. The image was captured by NASA's Terra satellite. For another view, captured by the Suomi NPP satellite, check out this post at the Cooperative Institute for Meteorological Satellite Studies. Here's a beautiful photo of Cleveland shot from an airplane a couple of years ago:

Cleveland volcano looms above the clouds in the background of this photograph taken from an airplane on May 31, 2012. (Photograph: Cyrus Read, Alaska Volcano Observatory / U.S. Geological Survey) Meanwhile, just a bit to the East:

A Von Karman vortex street. (Image: NASA) A line of spiraling clouds called a Von Karman vortex street formed on May 4 downwind of the high terrain of the Aleutian Islands, just east of Cleveland volcano. As with the top image, this one was captured by NASA's Terra satellite. For an explanation of the phenomenon, along with a pretty cool animation showing how the vortices form and propagate, click here.