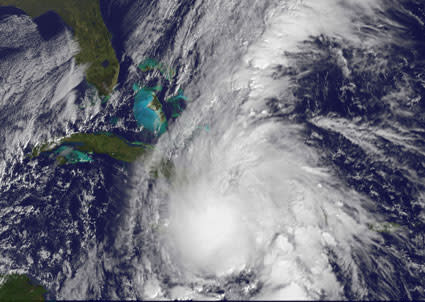 The planet's tumult never ceases. Hurricane Tomas is bearing down on Haiti right now, and an erupting volcano continues to wreak destruction on Indonesia.

At 8 a.m. EDT on Nov. 5, Tomas' center was about 80 miles south-southeast of Guantanamo, Cuba and 160 miles west of Port Au Prince Haiti.... Tomas is moving to the northeast near 10 mph, and is expected to speed up over the next couple of days. [NASA Press release]

The hurricane is currently a category one, with sustained winds of 85 miles per hour, and is expected to continue strengthen throughout Friday before weakening on Saturday. The hurricane's strong winds and flooding may hit the country hard: Haiti's earthquake in January

"Haiti has a really serious history of big landslides, almost all of them caused by tropical storm or hurricane rainfall," said geologist David Petley, the Wilson Professor of Hazard and Risk at Durham University in England. [LiveScience]

If the hurricane stays on its current course it will pass just to the west of the small island nation, but there may still be plenty of damage and human misery. Many Haitians whose homes were destroyed in the earthquake are still living in temporary homes that won't be able to stand up to the winds.

"It's really very difficult to predict what's going to happen now," Petley said, "but the risks are substantial. Our experience elsewhere is that lots of rain in areas that have had earthquakes leads to lots of landslides, so that's a reason to be very cautious in this case." [LiveScience] 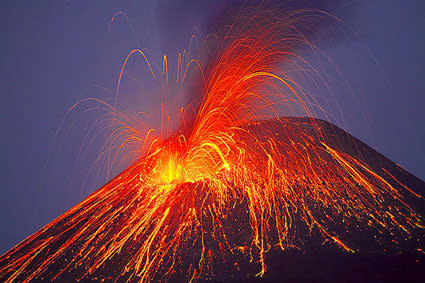 On the other side of the globe, the Indonesian volcano Mount Merapi erupted last night in the deadliest blast since 1930, killing 64 and causing 160,000 villagers to flee the area.

The head of Indonesia’s Volcanology and Geological Disaster Mitigation Agency, Surono, said the pressure inside the volcano’s chamber is much deeper than in earlier eruptions. As pressure builds deeper it produces more forceful eruptions that release greater volumes of ash and debris. “If the deep volcanic earthquakes increase, in number and in energy, I’m scared Merapi will erupt with a big intensity,” Surono said. [The Christian Science Monitor]

The volcano started spewing hot gas and ash on October 26th, and this latest eruption brings the total death toll to 109. The residents killed by this latest eruption were overwhelmed by a rush of hot gasses that hit the towns of Argomulyo and Bronggang, located about 7.5 miles from the volcano.

“They lived in a bend in the Gendol River. So when the pyroclastic flow launched down the river, it hit the bend and crashed into the villages,” Mr. [Sutopo Purwo] Nugroho said. “They’d been told to evacuate, there were a lot of soldiers up there to get them out but a lot of people had gone up using small roads so got up there undetected,” he said. [New York Times]

The evacuees are now in new camps located 12.5 miles from the volcano, but there's considerable confusion as the new camps deal with relocating supplies, shelters, and evacuees from camps that proved to be too close after this latest eruption. Related Content: 80beats: Icelandic Volcanoes–Disrupting Weather & History Since 1783

The Intersection: Hurricane Season Isn’t Over

The Intersection: The Coming Hurricane Season is Forecast to Be Brutal