Moonrise at Sunrise from the International Space Station

Seen from this perspective, the atmosphere doesn’t seem as limitless as from Earth’s surface 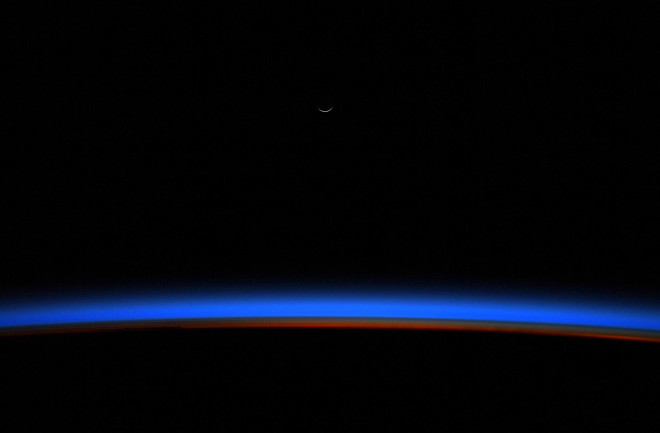 I spotted this serenely beautiful photo of the crescent moon rising above the limb of the Earth at sunrise on Twitter. I was so taken with it that I just had to share it.

It’s undated, but this stunning moonrise at sunrise photo was photographed recently by NASA astronaut Christina Koch from the International Space Station.

On Oct. 18, Koch made history with her fellow NASA astronaut Jessica Meir, when the two accomplished the first all-female spacewalk. They spent seven hours outside the space station, fixing a failed power controller.

The Canadian-built Dextre, a two-armed robot aboard the International Space Station, could be a predecessor to a fleet of robots capable of repairing defunct orbiting satellites. | NASA

As photographed by Koch, the blue luminous envelope of Earth’s atmosphere seems tenuously thin. This helps me grasp how we humans, a seemingly puny species, could actually alter the makeup of the atmosphere in a way that fundamentally alters the climatic life support system of our planet.

Seen from this perspective, the atmosphere doesn’t seem quite so limitless as it does when we simply look up from Earth’s surface.

Koch, 40, has been aboard the space station since mid-March and is scheduled to remain there through February. That would make for 328 days in space, which would be a record for the longest single spaceflight for a woman.