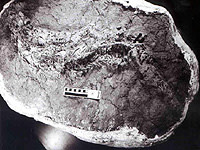 This ancient amphibian was protected from predatory fish by bony scales. The scales, seen here as speckles along the length of the curving spine, ran from the creature's head (on the left) to its tail.

Paleontologists are getting a clearer view of life during the Mississippian Period, 360 million to 325 million years ago, when shallow tropical seas covered much of what is now North America. The warm waters swarmed with unique animals, including bizarre flowerlike invertebrates called crinoids, primitive fish, and early amphibians. (Dinosaurs and other reptiles did not evolve until many millions of years later.) William Garcia, a graduate student at the University of Cincinnati, has now identified what may be one of strangest beasts in the Mississippian menagerie: a three-foot-long eel-like amphibian covered from head to tail in thick, bony scales.

Although armor-plating is occasionally found in other ancient amphibians, this feature is most common among land-dwelling creatures that probably used the scales “like a girder bridge,” says Garcia, to help brace their vertebral columns. But the new amphibian, a member of an extinct group called the Colosteids, was almost surely a purely aquatic beast. So why did it need scales? Garcia pondered this question as he helped prepare the fossil specimen after its discovery in a deposit in Hancock County, Kentucky. When he described the find at the Geological Society of America’s annual meeting in Seattle earlier this month, he also offered a possible answer. The unnamed amphibian most likely used its half-inch thick scales, which were ornamented with pits and ridges, for protection against even scarier sea monsters—car-size amphibian-eating fish.

Before the rise of the reptiles, large amphibians traditionally sat on the top rung of the food chain, occupying an ecological niche similar to that of modern crocodiles. The new creature’s rows of conelike teeth indicate that it dined on fish. Not all of the fish of the Mississippian Era were dinner, however; some of them were probably looking down on this hapless amphibian from higher up on the food chain. “In the same deposit we find a number of large predatory fish that could easily prey upon these amphibians,” Garcia says. “It’s unlikely that the scales found on our amphibian would have been much use against a 5-meter [16-foot] fish with 8- to 9-inch-long teeth, but they may have been useful against subadult or juvenile fish.”