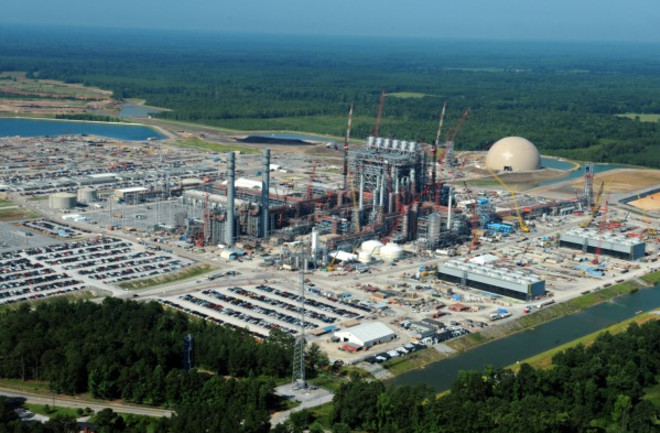 The Kemper power plant. (Credit: Wikimedia Commons) A once-promising clean coal plant in Mississippi is set to switch to natural gas instead. The facility, run by utility provider Southern Company, is over budget and behind schedule, and has failed to achieve its goal of producing electricity from coal with significantly reduced carbon emissions. A review by the Mississippi Public Service Commission gave the plant until July 6 to begin planning its future and recommended a switch to natural gas, reports the New York Times.

The plant has actually been burning natural gas for three years now as engineers attempted to perfect a design that would take dirty lignite coal from a nearby mine and scrub it of carbon dioxide after burning. While they captured a small amount of carbon, the unproven technology they were attempting to implement turned out to be too costly and complicated to put into action. The project was launched in 2010 and is now $4 billion over budget and three years behind schedule. In its decision, the state also placed much of the financial burden on Southern Company's shareholders, as opposed to customers, something the utility has said it will fight in court. The original plan was to rely on a process called "gasification" to convert coal into natural gas that would then be burned. Natural gas burns much cleaner than coal, and the technology would have resulted in an estimated 65 percent reduction in emissions over a traditional lignite coal plant. In all, only about 92,000 tons of carbon dioxide have been captured (a coal plant produces roughly three million tons of gas annually).

The news is a major setback for proponents of clean coal, who hope that the fuel will continue to be a major source of energy for the nation. Coal currently accounted for roughly 30 percent of the U.S.' energy production profile in 2015, although that number has been dropping steadily. Other clean coal plants exist, and one in Texas, the W.A. Parish Generating Station, recently came online. Carbon capture technology is estimated to contain 90 percent of the emissions from the plant, although it has only been put in place on one of ten generating units there, according to Clean Technica. In addition, the equipment requires additional power to run, further lowering the total reductions to carbon emissions. The relative benefits of clean coal have been debated for some time, and the argument hinges on whether renewable energy sources can shoulder a larger share of energy production. Though renewables are getting both cheaper and more widespread, they have a significant amount of ground to make up before they will be able to compete with fossil fuels. Natural gas has already overtaken coal as a main source of electricity production in the United States, and although it is has been traditionally more expensive, a glut of low prices could further entrench its position as the dominant energy source.