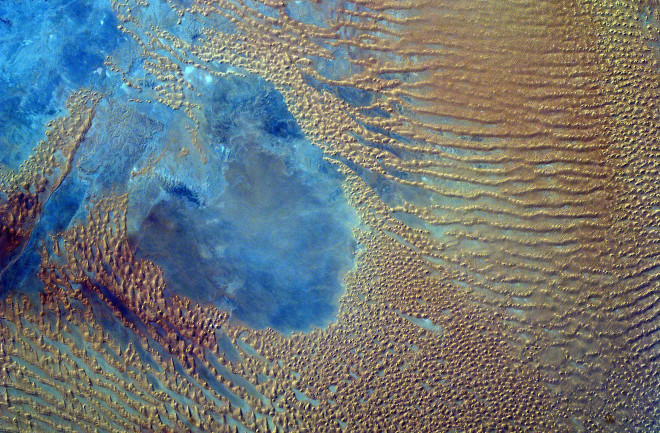 The Sahara desert in western Libya as seen from the International Space Station in October. (Source: Sally Ride EarthKam/NASA) Middle school children programmed a camera on the International Space Station to capture this stunningly beautiful photograph of the Sahara in Libya. It's part of a NASA project called EarthKAM: "EarthKnowledge Acquired by Middle school students." The program was begun in 1998 by Sally Ride, America’s first woman in space. (At the time it was called KidSat.) EarthKAM is intended to use the unique vantage point of space to help students, teachers, and the public gain knowledge about one of the planets in the solar system: our own home planet, Earth. As part of the program, middle school students around the world request images of specific locations on Earth, and these are archived in searchable archive. The image above was posted to the International Space Station's Instagram feed yesterday. Not much in the way of caption detail was offered, so I'll try to fill in the gaps. This is obviously a false-color image. The blue is not indicative of water between the yellow-brown sand dunes. Instead, I'm pretty sure the blue shows inter-dune clays and silts, helping to distinguish between the more sandy sediments of the dunes themselves. EarthKAM is among the many educational benefits of NASA's current Earth science program. With the election of Donald Trump, the future of that earth science program is in question. During the run-up to the election, space policy advisors to the Trump campaign said:

NASA should be focused primarily on deep space activities rather than Earth-centric work that is better handled by other agencies.

What exactly that will mean for NASA's remote sensing work, and valuable activities like EarthKAM, is up in the air.