Microplastics Are Falling Along With Snow in the Arctic 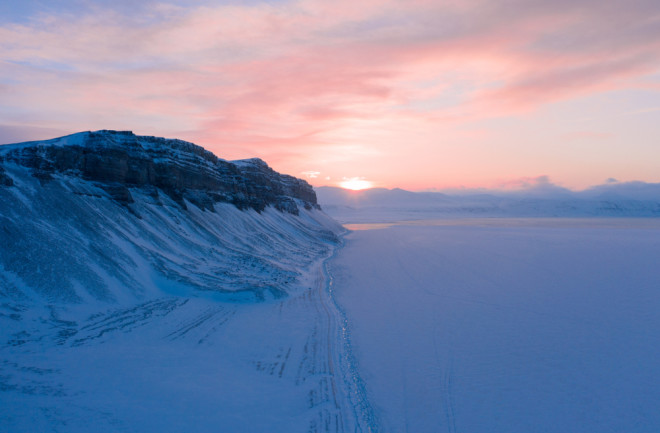 When it snows in the Arctic, there’s another kind of flake drifting down alongside the ice crystals. Tiny bits of degraded plastic, commonly called microplastics, have been found swirling among the snow in otherwise pristine Arctic environments.

Microplastic pollution has previously been found everywhere from city streets to the deep seafloor and remote, uninhabited islands. Researchers say the find may explain why previous studies found microplastics in Arctic sea ice and the deep sea.

In the last few years, Bergmann and colleagues have discovered huge quantities of microplastics in the Arctic. They found as much as 12,000 bits of plastic in a liter of melted sea ice – the volume of a typical Nalgene water bottle – and more than 3,000 particles in a pound of deep-sea sediments. The find was disconcerting. But not just because it was more evidence that plastic pollution has infiltrated nearly every environment on Earth. The nagging question was how so much plastic had gotten to the Arctic, an uninhabited and isolated region, in the first place.

The scientists thought ocean currents might have carried the plastic flecks from northern Europe. But other researchers had reported microplastics in the air and dust, so “atmospheric transport struck us as another strong possibility,” marine ecologist Melanie Bergmann, who led the new research, said in an email.

Although the team has tools to filter plastic particles from the air, they couldn’t leave the instruments out for extended periods of time. Instead, they turned to another kind of airborne particle, snowflakes. The idea was that any microplastics in the air would get caught up in the snowflakes and fall to the ground with them.

They probed snow that had settled on Svalbard, an archipelago in the Arctic Ocean, and on floating ice sheets ice in Fram Strait, a passage between Svalbard and Greenland. For comparison, the researchers also assessed snow samples from a remote location in the Swiss Alps and urban areas in Europe.

Samples of some of the microplastics researchers found in snow from the Arctic. (Credit: Bergmann et al./Science Advances)

“That is much higher than what we would have expected for such a remote environment,” Bergmann said.

Varnish and rubber particles were among the most abundant types of plastics the researchers found. They say the rubber particles could have come from tires, roofing material and offshore oil platforms among other sources.

“Nowadays many surfaces are covered with a polymer-based coating,” Bergmann said, listing cars, buildings, aquaculture and ships as potential sources.

“The whole chain of plastic processing from production to waste disposal is estimated to eat 14 percent of the carbon budget that we have left until 2050 if growth continues as it has in recent years,” she said. “We really cannot afford this given that we are very close to passing tipping points already.”