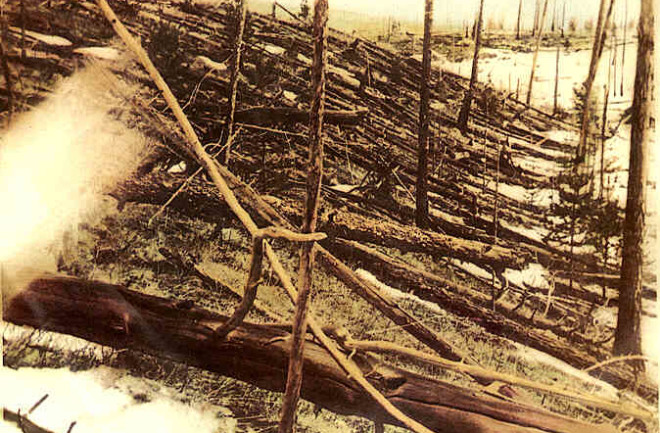 Damage from the 1908 Tunguska impact as documented by Leonid Kulik on his 1929 expedition to the epicenter. On this day 105 years ago, Russians were reeling from the enormous fireball that streaked through the sky the day before and flattened almost 800 square miles of trees near the Podkamennaya Tunguska River. It wasn't a bird. It wasn't a plane. And it sure as heck wasn't Superman. But whatever it was, scientists found no trace of it in the charred rubble. It has taken researchers over a century to identify the extraterrestrial object---but in a recent paper, geoscientists revealed that the culprit was indeed a meteoroid.

The burning chunk of rock struck Siberia on June 30, 1908 with a force 1,000 times more powerful than the atomic bomb dropped on Hiroshima. Over a century later, it is still the largest impact event in Earth's recorded history. The area was uninhabited (luckily) but that did not mean the blazing ball of who-knows-what went unnoticed. Scientific expeditions over the last century have combed the site and proposed a flurry of hypotheses: some said meteoroid; some said comet. The comet hypothesis was gaining traction by mid-century since such a mass of ice and dust would have vaporized when it hit the Earth's atmosphere, causing an explosion without leaving any physical trace. But with so little evidence to go on, none of the theories could be proven. A 1978 expedition came closer when it uncovered minuscule mineral samples embedded in peat at the epicenter of the blast. Researchers determined the samples to be 99.5 percent carbon with inclusions of other trace elements such as troilite and iridium. The amount of pressure required to form such samples suggested that the minerals were contained in a meteorite that smacked into the Earth. But these samples could also have formed when the heat and pressure of the space blast encountered rocks right here on our home planet, so the results were deemed inconclusive.

Zooming in on the structure and composition of the Tunguska mineral samples. Image courtesy of Kvasnytsya et al./Planetary and Space Science

Armed with new and improved scanning technology, a group of geologists from Europe and North America decided to resurrect these mineral samples from their archive in the Ukrainian Academy of Sciences. They analyzed the samples with traditional microscopy techniques, mass spectrometry and high-powered X-rays---techniques that have been developed and refined in the past few decades---to give a much more detailed view, and published their findings in Planetary and Space Science in May. While the carbon components of the samples weren't necessarily from out of this world, the iridium concentration was ten times higher than in Earth rocks. The researchers were able to look at the surface structureand chemicalcomposition of the samples in detail to determine that the mineral samples gathered at Tunguska most likely represent tiny bits of an iron meteorite. They suggest that the structure is the result of rapid cooling after an impact, and report that the mix of minerals matched those of other confirmed iron meteorites, like the one found in Arizona. So it looks like the case is closed, just in time for Tunguska to blow out the candles on its 105^th carbon-studded birthday cake. Let's just try to keep the fire under control this time.