In only a million years we'll have an eighth continent, courtesy of the drift between African and Arabian tectonic plates. 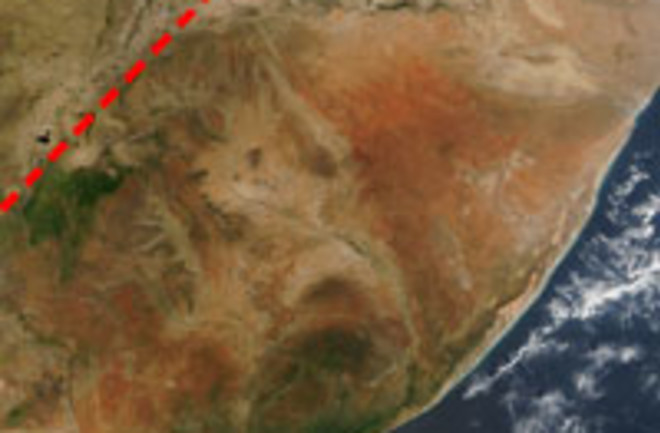 During the next one million years, theEthiopian rift will extend from the RedSea to the Indian Ocean. When it does,the Horn of Africa will become a newcontinent. | NASA

Last September, the ground in part of northern Ethiopia suddenly dropped 10 feet and split apart so quickly that the gaping hole swallowed camels and goats. Over the next three weeks, the earth quaked 160 times, opening up a 25-foot-wide crack a third of a mile long.

Using satellite radar data, Tim Wright, a geophysicist at the University of Leeds in England, has pieced together exactly how the gap got started. As the African and Arabian tectonic plates drift apart, the crust between them weakens. "Magma forming at the base of the crust periodically drips up, like a lava lamp, and pools in a chamber—like a balloon slowly inflating," Wright says. "When the balloon reaches a critical pressure, it pops." That pop caused a contained volcanic explosion, injecting molten rock into a 35-mile-long elongated bubble just a few miles underground and forcing a crack in the surface above.

As the plates continue to drift apart, tension increases until the whole process happens again. "Eventually, we think it will connect to the Red Sea, and water will flood in," says Wright.

He calculates that in a million years or so the split will extend so far that the Horn of Africa will be cut off from the rest of the continent. This type of geologic process happens all the time, says Wright, but the rifting usually takes place on the ocean floor, where it is harder to see. "This is the first time we've ever been able to use modern instruments to observe this fundamental process directly," he says.