Maybe No One Killed The Electric Car? 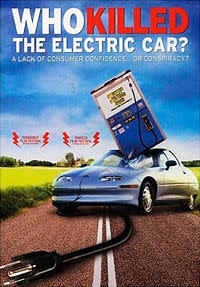 Readers response to my post on biofuels yesterday was tremendously interesting with many new ideas, perspectives, and avenues to wander down in the future. The second installment at Next Generation Energy is already up this morning offering a different persepctive from Joseph Romm of Climate Progress:

Toyota, General Motors, and Volkswagen have already said they will introduce plug-in hybrid electric-gasoline vehicles to the U.S. market in 2010. These vehicles are likely to have a 20 to 40 mile range running on electricity before they revert to being a fuel-efficient gasoline hybrid. That would allow most people to do most of their driving on electricity.

I expect his closing note should dispel remaining qualms over Shell's sponsorship:

Some have criticized the Shell sponsorship of this blog. But Shell exerts no editorial control, so I'll let others lose sleep over this. Personally, while I once admired Shell, especially their strategic planning about global warming and renewable energy, their pursuit of tar sands and, even worse, oil shale, makes clear they are simply another short-term-profit-maximizing long-term-climate-destroying oil company.