Map: Where Do the Nastiest Hurricanes Emerge?

If you think the U.S. East Coast has it bad, check out the western Pacific. 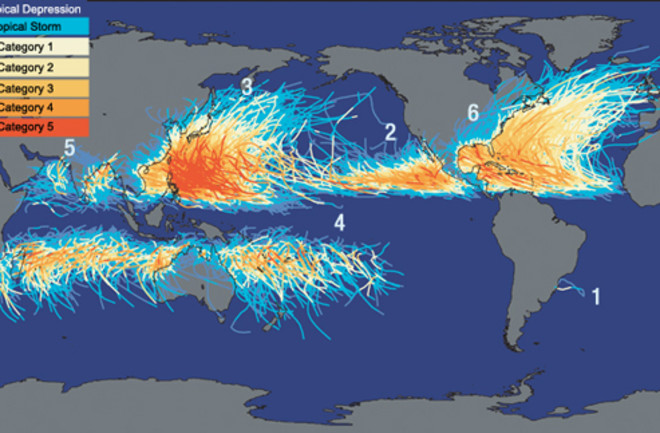 The skies of September can bring the wrath of the Atlantic hurricane season. Some years are worse than others, but if all the storms of the past century and a half were to hit at once, this is where they’d be. University of California at Berkeley physics grad student Robert Rohde used all available data from government sources to map 150 years’ worth of hurricane tracks through September 2005.

Hurricane Catarina made landfall near Torres, Brazil, on March 27, 2004. Catarina went down in history as the only recorded category 2 hurricane in the region. While the South Atlantic is not immune to tropical cyclones, they occur so infrequently there that scientists barely pay attention. “No one tracks those,” Rohde says.

2 California whorls Compared with the East Coast, California has it easy. That’s because a current of cold ocean water moves from north to south along the West Coast, cooling the coastal Pacific and removing the threat of hurricanes, which form only when low pressure systems siphon off the energy from warm ocean water.

3 Everyone out of the pool! The other side of the Pacific packs more category 5s than anywhere else. There, warm waters and quick currents come together to form the Western Pacific Warm Pool. That hot tub is a veritable breeding ground for violent cyclones.

4 Why the equator is calm Contrary to popular belief, the Coriolis effect—which arises when objects move within a rotating reference frame—does not explain the direction that water spins as it vanishes down your toilet bowl. It does, however, help us understand why all the tropical storm tracks are moving away from the equator. In the south, air moves clockwise; in the north, counterclockwise. At the equator, the Coriolis effect is zero, and no Coriolis means no circling cyclones.

5 At least someone’s happy Tropical storms can be friend or foe. The inland tracks on the Indian subcontinent are typical of tropical storms that blow in during the rainy season. Countrywide festivals celebrate these monsoon rains, which offer a seasonal break from sweltering summer temperatures and irrigate growing crops.

6 The biggest and baddest Katrina, which hit in August 2005, was the costliest hurricane in history, racking up more than $80 billion in damages. With wind speeds of 140 miles per hour, it still wasn’t the strongest Atlantic hurricane on record; number one was Camille, which hit Mississippi moving at 190 mph in 1969.