The Wall Street Journal today has a story about Rob Anderson, a guy, who, to judge from his little WSJ illustration, appears to favor old-school spectacles. He lives on a government stipend in an apartment in an old Victorian in San Francisco. And he has brought the city's bike-friendliness initiative to its knees. 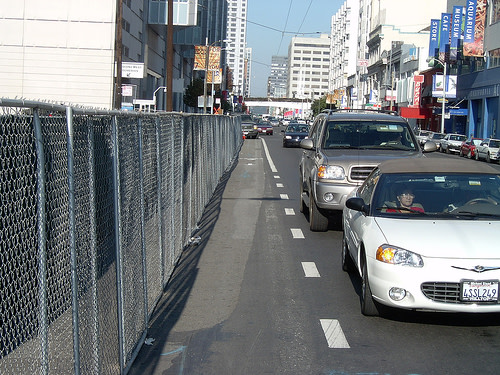 Anderson took the city to court a couple years ago arguing that cars will always vastly outnumber bikes in the city, and that pledging space to bikes space necessarily reduces space for cars, causing traffic jams and thereby raising emissions. He won; the state forced the city to write up an environmental impact report, and the initiative is still stalled. Meanwhile, cyclists protest, and Anderson blogs about how cyclists are like Islamist terrorists. Mike Judge take note.