Looking Back at Earth: A Tiny, Pale Blue Dot 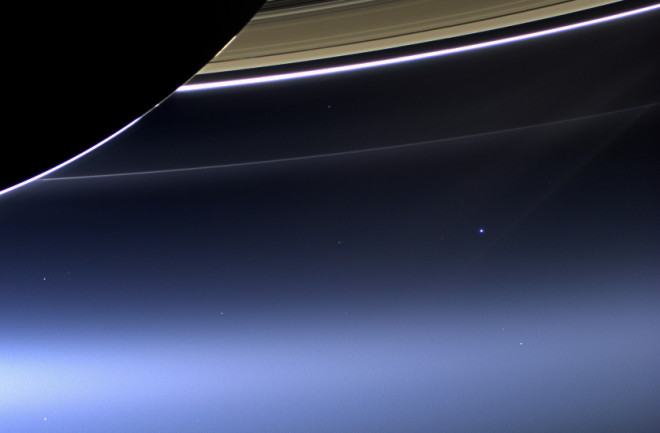 In this portrait by the Cassini spacecraft, looking past Saturn toward the inner solar system, Earth is the tiny blue dot at center right. (Image: NASA/JPL-Caltech/Space Science Institute)

7/23/13 | Update below on the origin of the term 'pale blue dot', a stirring quote from Carl Sagan, and an additional image |

Here it is: Cassini's greatly anticipated portrait of the Earth, as seen from the Saturnian system nearly 900 million miles away. It's the pale blue dot in the right center of the image, under Saturn's luminously beautiful and delicate rings. According to NASA, this is only "the second time that Cassini has imaged Earth from within Saturn's shadow, and only the third time ever that our planet has been imaged from the outer solar system." I think this truly is a 'wow' moment. Here is a closeup, showing Earth and the moon together:

The Earth and Moon, as imaged by the Cassini spacecraft from Saturn. The image has been magnified five times. (Image: NASA/JPL-Caltech/Space Science Institute)

Earth is the larger, blue dot; the moon is the smaller, whiter one.

According to NASA, this is just the beginning:

It is only one footprint in a mosaic of 33 footprints covering the entire Saturn ring system (including Saturn itself). At each footprint, images were taken in different spectral filters for a total of 323 images: some were taken for scientific purposes and some to produce a natural color mosaic. This is the only wide-angle footprint that has the Earth-moon system in it.

This is by no means the most distant portrait of Earth taken by one of our robotic explorers. Check out this one, shot from nearly 4 billion miles away, by the Voyager-1 spacecraft in June, 1990:

Image: NASA Visible Earth Don't see it? Keep looking... Are we feeling humble yet? 7/23/13 | Update: Voyager's historic image of Earth was part of a series that also included Neptune, Uranus, Saturn, Jupiter, and Venus. The tiny speck that was Earth inspired Carl Sagan, a member of the Voyager imaging team, to dub Earth "a pale blue dot." And in 1997, his book by that name — "Pale Blue Dot: A Vision of the Human Future in Space" — was published. In it, he penned these stirring words:

From this distant vantage point, the Earth might not seem of any particular interest. But for us, it's different. Consider again that dot. That's here. That's home. That's us. On it everyone you love, everyone you know, everyone you ever heard of, every human being who ever was, lived out their lives.

In 1990, Voyager-1 pointed back toward the sun and took this mosaic of 60 pictures of the solar system, capturing images of Jupiter, Venus, Saturn, Uranus, Neptune — and, of course, Earth. (Mosaic: NASA/JPL