Life at the Bottom of a Mine

A microbiologist goes deep underground to explore what happens in the absence of radiation. 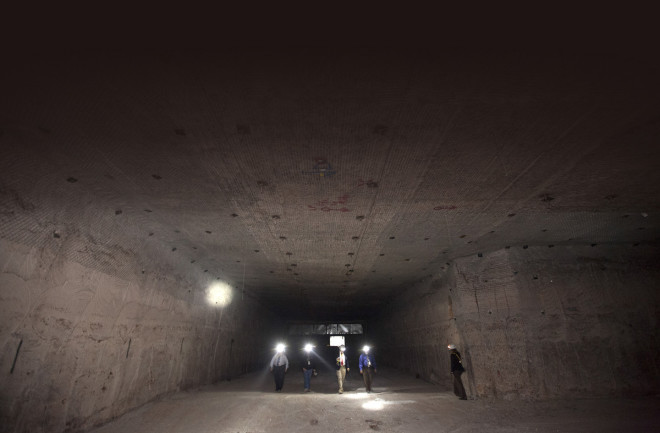 To investigate how life reacts to a nearly complete lack of radiation, astrophysicists and biologists have turned to, of all places, the same deep underground tunnels that house radioactive waste. It turns out that the thousands of feet of solid salt deposits and clay designed to protect against radiation leaks also protect the caverns from the background radiation constantly hitting Earth’s surface.

That means New Mexico State University microbiologist Geoffrey Battle Smith has spent most summers commuting to work in a bumpy, 500-feet-a-minute elevator down a 2,150-foot mine shaft in the desert outside Carlsbad, N.M. Inside a tunnel, formally known as a drift, Smith incubates bacteria and mammalian cells in a steel vault the size of a garden shed.

Data from his experiments suggest the absence of background levels of radiation causes a stress response and inhibits microbial growth, challenging nuclear safety protocols that consider no radiation the only safe level of exposure.

Early in his experiments, when the 1,500-pound doors of his vault dangerously pinched an electrical cord, Smith showed how far he was willing to go to save his data.

It’s 2009, and I’d just completed my mine safety training. I go underground and get to my steel vault, and there’s a note saying, “We are going to shut this experiment down by tomorrow if you do not get this repair done on the vault.” There’s a big staff of engineers topside, so I go back up and spend the afternoon asking for help. An engineer tells me he can’t do it until next week, but he says, “If you want, you can do it yourself.” He gives me instructions.

When I get to the shaft I normally go down, it’s closed, so I go to another one. They told me, “We’ll take you down, but there’s limited time. Our last manned trip is at 3:30. You’ve got one hour.” Then I realize I don’t know where I am, so I ask the hoist man, “Which way is north?” Those kinds of questions confirm that I’m not a miner.

He says, “You go down this drift, and then you make a left. Go through the air lock.”

I get down there, and it’s a hike. The feeling I have is that I’m on a spacewalk and I’ve been assigned to make a critical repair, like in the movie Gravity. It felt like I was in space. It was pitch black.

I’m hoping this is the right direction. My heart’s in my throat. I’m going in and saving my experiment.

I get to the first unfamiliar air lock, and this huge, loud sound goes off, and this strobe turns on and scares the snot out of me. The maw of this room opens. I have to walk through this monster and then pull a rope to close it.

I didn’t want to do it, but I did. I felt like I was closing myself in, thinking, “That’s going to be last they heard of me.”

Finally, I make it to the steel vault. I get in there and get to work. I had to hoof it to get out of there by 3:30, but I did it. I had this feeling of being fearless but actually being full of fear. It was intense.

Normally, the glare and heat of the sun is a shock coming up from underground, but in this case it was a breath of fresh air.

[This article originally appeared in print as "Into the Dark."]