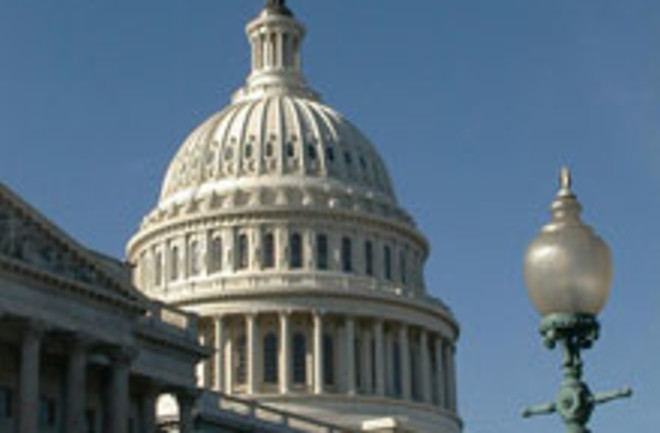 Things are about to get hot on Capitol Hill. Today the Senate takes up the Lieberman-Warner climate change bill, and politicians on both sides are bracing for a messy debate. Observers say it’s unlikely to pass – even if the bill got enough votes, it would certainly be vetoed by President Bush – but it serves as a warm up for next year, when Congress will raise the issue again, under a new administration. All three presidential candidates support some form of global warming regulations. Just about everyone sees the writing on the wall: the federal government must regulate the emission of greenhouse gases, and it must act soon to stave off the most negative impacts of global warming. Last week, the Bush administration issued a climate change report on the potentially dire consequences to ecosystems, agriculture and public health. Meanwhile, corporations such as Ford and ConocoPhillips have been meeting regularly with environmental groups for over two years in an attempt to shape a climate change policy that won't bite too deeply into their profits. The Lieberman-Warner bill would create a cap-and-trade system similar to the approach used in the 1980s to curb sulfur emissions that caused acid rain. The bill would set a maximum amount of greenhouse gas that could be released each year, and would dole out emission permits to power plants, refineries and factories. Companies that found ways to reduce emissions could sell their extra permits, providing an economic incentive for companies to clean up. The bill would create an entirely new industry: The carbon market, which experts say

could turn into one of the biggest markets in the world, estimated to be worth over $200 billion a year [The New York Times].

The stark economic facts ensure that even if the nation's legislators are creeping closer to political consensus about global warming, there are plenty of battles still to be fought. The bill would impose new pollution regulations on industries while significantly expanding another business, carbon "offsetting." Billions of dollars would potentially be available for farmers who offered polluters a way to make amends for excess emissions -- a provision that could attract crucial support from farm-state lawmakers.

"I definitely think this debate will be primarily about economics, because there are very few voices left who want to argue about whether or not global warming is really a problem," said Dan Lashof, director of the Natural Resources Defense Council climate center, a bill supporter [Los Angeles Times].

Off the hill, many environmentalists think the current bill is useless, and doesn’t address the true scope of the problem. Some climate scientists apparently agree. Several members of the Intergovernmental Panel on Climate Change recently declared that a "false optimism" surrounds the issue of global warming, leading politicians to think that relatively minor cuts in greenhouse gas emissions can prevent serious threats to our way of life. This mindset is "obscuring reality," they wrote.

The sooner we recognize this delusion, confront the challenge and implement both stringent emissions cuts and major adaptation efforts, the less will be the damage that we and our children will have to live with [Nature Reports: Climate Change].