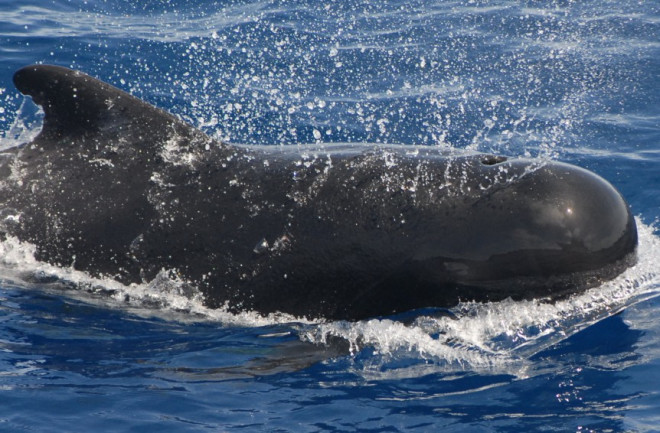 Submarines traveling in the Antarctic Ocean first recorded it in the 1960s -- a mysterious quacking sound that baffled observers around the world. They called it the 'bio-duck' calls. Many theories floated around, yet the origins of the sound remained unknown. Until recently, that is. “Frolicking With the Whales” from in the July/August print issue of Discover Magazine describes how the mystery was finally solved and what it means for the study of the Antarctic Minke Whale. With the citizen science project WhaleFM, you can also help identify whale calls.

Vocalization and listening to auditory signals are particularly important for marine mammals such as whales and dolphins to survive. Why? Because in the depths of the ocean, neither sight nor smell is very useful. In fact, sound is a vastly more efficient medium of conversation, as sound travels four times faster in water than it does in air. Marine biologists have long used these fascinating whale 'songs' to track whale populations and study their behavior. Killer Whales (Orcas) and Pilot Whales employ a complex array of calls to communicate within their species. An interesting aspect of both species is that they live in very stable groups (called pods) that are centered around the mother. Often, the offspring live with the mother for their entire lifetime. During this period, they develop unique dialects that help them identify and converse with family members even if they have strayed away from each other for feeding.

A towed hydrophone array that helps record whale calls from a large area (Image Credit: Whale FM) Biologists realized that human activity such as shipping, ocean exploration and offshore construction could affect whales, bringing about a change in their behavior (and hence their vocalizations)^1. In an effort to understand these effects, a group comprising of investigators from several research institutes spanning the Atlantic including St Andrews University (UK), Woods Hole Institute (USA), The Norwegian Defense Research Establishment and TNO, an independent Dutch research organization began to study the effects of sonar (used by ships) on the behavior of marine mammals. “We want[ed] to connect specific call types to specific behavioral patterns (e.g. diving, social interaction, feeding behavior). It’s also useful to understand the way these animals communicate on a more basic level without [the] influence of human activity.” says Dr Sander von Benda-Beckman, a researcher at TNO and a part of this effort. The team recorded the sounds made by Killer and Pilot whales using instruments known as D-Tags and hydrophone arrays. D-Tags are small devices attached to whale fins using suction cups that record sounds made by the whales and animals nearby. Not all whales can be tagged in this manner however, and the tags can also lose suction and fall off with time. So in addition to the tags they used 'hydrophone arrays', which are essentially microphones that are optimized to pick up sounds under water. These arrays are extremely sensitive, picking up noises made by whales several miles away. Both the instruments also recorded sounds generated by human activities^2.

A towed hydrophone array that helps record whale calls from a large area (Image Credit: Whale FM) When the team began analyzing the data they quickly realized they had a problem on their hands. “During the analysis of these datasets it turned out that it was too time consuming to get through all the acoustic data collected for the pilot whales, who are a very active species,” says Dr.Benda-Beckmann. Faced with a large data set and a time intensive analysis process, he turned to citizen science. “My background is in astronomy and I recalled the very successful GalaxyZoo project, and suggested we’d try something similar for categorizing the pilot whale calls using citizen science,” he says. The choice to allow citizen scientists to analyze the data was also important because it would remove the potential of any bias that would have existed if the classification were done by a few people. When Dr.Benda-Beckmann presented the team with his idea they were enthused by it and created Whale FM, a citizen science project in collaboration with Zooniverse and Scientific American. Instead of describing how the project works here, I decided to try my hand at it and write about my own citizen science experience. I found that the process itself to be quite straightforward. Upon visiting the site, the center of the screen contained a whale call shown as a spectrogram (a graph of the pitch changing with time). I first listened to this spectrogram, noticing the unique aspects of it. My first call for example, started at a lower pitch and increased before finishing again on a lower note. Below the central call I found were several other recorded spectrograms. I listened to each of them and picked the one that I thought most closely resembled the original call. While my first match turned out to be an easy one, the trend didn’t last long. Subsequent matches presented interesting challenges that kept me trying to do more, wondering whether I would get the next one right. The calls were tricky to discern and often background noises from other animals or human activity obscured the actual calls. Some calls were more complex than others with several changes in pitch. At other times, I thought several calls among the options presented sounded similar. In such cases, I picked the one that I thought was the best match, trusting the wisdom of the crowd to correct my answer if it was wrong. After all, I realized, that was one of the purposes of crowdsourcing the analysis!

A screenshot from the Whale FM project page displaying the spectrograms to be matched (Image Credit: Whale FM) The project launched in 2011 and received an overwhelmingly positive response. By 2013, approximately 15,000 volunteers had completed over 200,000 classifications^3. While the main analysis of the citizen scientists’ matches is still in progress, the team has already identified some interesting results. “Results from the Whale FM project [have] been used to [publish] two peer-reviewed papers so far. One, where it is actually used to support expert-judgment of pilot whales call categories in the Bahama’s[sic]. In a second paper, we start comparing the citizen science approach to unsupervised computer learning algorithms and show how both methods may be used to categorize large acoustic datasets. This analysis suggests that you can [effectively] recognize differences between Icelandic and Norwegian killer whale calls.” In addition, he says, “This dataset [generated by Whale FM volunteers] is probably useful to test and train computer algorithms to perform this task.” Importantly, the team also found that “having multiple citizen scientists greatly improves the reliability of the categorisation process,” according to Dr.Benda-Beckmann. Clearly, a big win for citizen science. The Whale FM team is expected to move into its final phase of data analysis soon. If you would like to contribute to the project, take a deep breath and jump into the deep end right now! Visit the Whale FM project page on SciStarter’s citizen science project database, sign up and start listening! (Note: Signing up for SciStarter is optional. You can use the link on the project page to go directly to Whale FM. However, I encourage you to join us and experience a whole new world of exciting citizen science projects, news and updates!)References1. "Whales | Background Information." Whale FM, Web. <http://whale.fm/background> 2. "Whales | The Science." Whale FM, Web. <http://whale.fm/science> 3. Thean, Tara. "Caller IDs for Whales." Oceanus Magazine. Woods Hole Oceanographic Institution, 25 July 2013.