Last month was Earth's warmest July on record — and by most measures the hottest month, period. 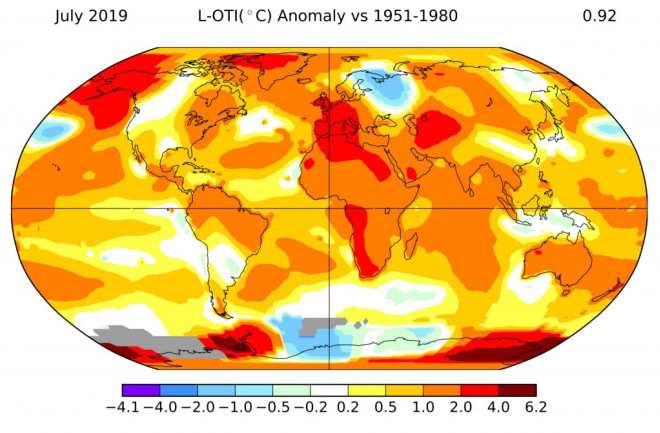 Most of our planet baked in July — earning the title for hottest month on record, according to two analyses, and in a tie in a third. (Source: NASA GISTEMP)

Two analyses out today show that in July, Earth endured its hottest month on record.

A third analysis shows last month in a tie with August 2016 for the dubious title of Earth’s hottest month in records dating back to the 1880s.

Also out today: An update from the National Snow and Ice Data Center shows that Arctic sea ice is currently in a dead heat with 2012 for title of lowest extent on record. We’ll know in September how this finally turns out.

Both the National Oceanic and Atmospheric Administration and Berkeley Earth, an independent climate science organization, separately found that this past July edged ahead of August 2016 to take the title for hottest month. But in both cases, the margin was small.

These findings are consistent with those from the European Union’s Copernicus Climate Change Service, released earlier this month.

In its own analysis, NASA’s Goddard Institute for Space Studies, has found that while last month was the warmest July ever observed, it tied with August 2016 as hottest month.

Nine of the 10 warmest Julys have occurred since 2005, according to NOAA’s analysis released today. Last month was also the 415th consecutive month with temperatures above the 20th century average, it said.

The month was characterized by warmer-than-average temperatures across much of the global land and ocean surfaces. Record-temperatures were present across parts of North America, southern Asia, the southern half of Africa, the northern Indian Ocean, the Atlantic Ocean, as well as across the western and northern parts of the Pacific Ocean.

While there were some areas that were near or cooler than average — including western Canada and some parts of the contiguous United States — these were very much the exception in July 2019.

Warm temperatures have drastically shrunk the extent of Arctic sea ice this year, putting it in a dead heat for title of lowest extent ever recorded. (Source: National Snow and Ice Data Center)

As the graph above suggests, the heat is nowhere taking a greater toll than up in the Arctic. The extent of the Arctic’s floating lid of sea ice has shriveled dramatically this summer, running for a time below the trend seen in 2012, the year that experienced the lowest extent on record.

Right now, the extent is as low at this point in August as it was in 2012. Each year, sea ice reaches it’s lowest extent in September, after the heat of summer. In records dating back to 1979, no extent has been lower than that observed in September of 2012.

Will this year surpass the losses seen seven years ago? According to the National Snow and Ice Data Center, if the rate of sea ice loss going forward occurs at the same pace as it did in most recent years, then this year will go down in the record books as having the second lowest sea ice extent.

But it sure has been an unusual year, full of surprises, so …