Lake Mead Shrivels to Historic Low Level. In Just Two Years, the Change is Dramatic Enough to be Visible from Space

An animation of images from NASA's Aqua satellite shows a visible change in the size of Lake Mead in just two years. (Source: NASA) Not that it was any surprise, but thanks to continuing drought, Lake Mead is projected to shrivel this week to its lowest level since it first filled behind Hoover Dam in the 1930s. All told, 40 million people in seven states depend on water from the Colorado River Basin. Lake Mead, situated near Las Vegas, is the giant hydrological savings bank that supplies water to the three lower basin states: Arizona, Nevada and California. 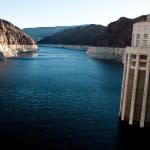 Lake Mead as seen from Hoover Dam. (Source: Bureau of Reclamation) The U.S. Bureau of Reclamation's announcement about Lake Mead this week has received a fair bit of coverage. So you may have heard the news and seen now almost cliché photos of the white bathtub ring around the reservoir made of mineral deposits left behind as the water level has dropped. (Click on the thumbnail at right for an example. It shows Lake Mead from Hoover Dam on March 8, 2014.) So for this post, I thought I'd try a different visual approach to dramatize what's happening: the animation above consisting of before-and-after images of the reservoir as seen from space. To create it, I used two images from NASA's Aqua satellite. The first is from June 29, 2012, when Lake Mead's elevation stood at 1,115.86 feet above sea level. Aqua snapped the second image on June 28th, by which point the reservoir had dropped to 1,082.93 feet. As I write this on July 11, the bureau expects the reservoir to drop below 1,081.75 feet — an historic low. The past 30 years comprise the driest such period in a record that extends back to 1906. And there is evidence from tree rings and other sources that what's being seen in the Colorado River Basin is even more unusual than that. The current drought is going on 14 years now. And as Matt Jenkins has reported in High Country News:

When matched up against every other 14-year period since 762 A.D., it falls in the driest 2 percent of all those periods.

That would make what we've been seeing one of the worst droughts in 1,200 years. This year, snowpack in the mountainous Upper Colorado River Basin is expected to be slightly above normal, which should offer a bit of a reprieve. Even so, there is a 50 percent chance that Lake Mead's elevation will drop below 1,075 feet by 2017. Should that happen, the Secretary of the Interior would issue a shortage declaration, triggering a significant reduction in water deliveries from the reservoir. Arizona and Nevada would be affected first. Whether this happens in 2017 or not, sooner or later a day of reckoning is coming. With continued increases in emissions of greenhouse gases, the Southwestern United States is expected to dry even further.

The SciencesThe Great Wedge of Astronomy
Recommendations From Our Store