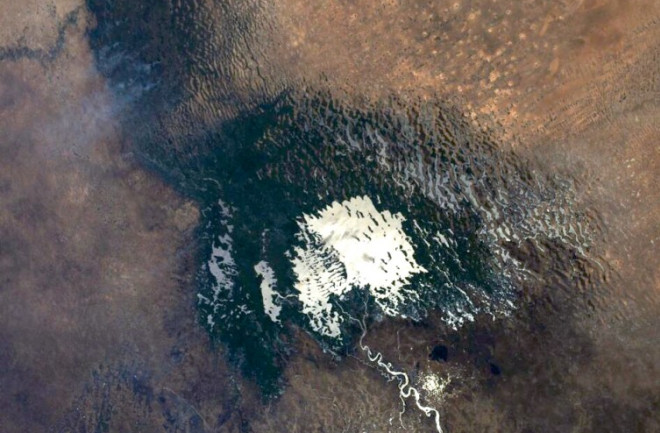 Sunlight glints from the surface of Lake Chad in West Africa, as seen from the International Space Station on Oct. 17. (Photo: Karen L. Nyberg/NASA) Lake Chad once was a giant — the sixth largest lake in the world. But in the last 40 or so years it has shrunk by more than 90 percent in area, thanks to persistent droughts and increasing withdrawals of water for irrigation. In Karen Nyberg's photograph above, shot from the International Space Station on October 17, what's left of the lake is illuminated by sunlight. Around it, and to the northwest, are ripples indicative of sand dunes — where water once was. And if you look closely toward the upper left, you can see smoke plumes — perhaps fires set by farmers. I think Nyberg's photo is a beautiful and bittersweet piece of Earth art. Here's what the lake looked like to the crew of Apollo-7 in October 1968:

Lake Chad as photographed from orbit by a member of the Apollo 7 crew in October, 1968. (Photo: NASA Earth Sciences and Image Analysis Laboratory ) The lake sits in the world's largest endorheic basin. That wonderful scientific word, derived from the Ancient Greek ἔνδον, éndon, "within" and ῥεῖν, rheîn, "to flow," means a drainage basin with no outflow. Beginning in the 1960s, Lake Chad, then about 22,000 square kilometers in size, began shrinking. By the 1970s, it had split in two. Severe drought was part of the story. And so was a shallow ridge that ran under the lake, separating its northern and southern portions. By the 1980s, the area of Lake Chad had shrunk to just 300 square kilometers. At that point, its northern portion went completely dry. You can see that portion of the lakebed in the northwest quadrant of the photograph. There was a break in drought conditions during the 1990s. In the following map charting the fate of Lake Chad, you can see the reappearance of part of the northern portion in 1997:

By 2001, Lake Chad was a shadow of its former self. (Map: GRID-Arendal) Recent research shows that were it not for withdrawals of water for irrigation and other uses — some 30 million people rely on it for their livelihoods — the northern and southern portions would have actually merged in 1999. But since the 1990s, drought conditions have returned, eliminating the water to the north. For the lake to recover to its 1963 size, an extra 26 cubic kilometers of water would have to flow back in every year for a decade. I wouldn't be on that happening.