This year's sizzling summer ravaged Europe's crops. Was it a portent of what's to come?

Europe’s summer heat wave left elderly city dwellers struggling to survive in their ovenlike apartments—and farmers desperate to save their wilting fields. Day after day for weeks on end, temperatures in France, England, and Spain soared more than 20 Fahrenheit degrees above average, creating severe drought conditions that devastated crops. World grain harvests plummeted by 32 million tons, with the worst shortfalls concentrated in a region stretching from the United Kingdom to Ukraine. The heat wave is over, but it left researchers wondering whether the searing summer was an anomaly or an indication that global warming has started to wreak economic havoc.

Lester Brown, president of the Earth Policy Institute in Washington, D. C., sees this year’s string of dog days as part of a climate trend that could lead to higher world food prices within the next couple of decades. “We now have four consecutive global harvests that have fallen short of annual grain consumption,” he says. “The current generation of farmers is facing both widespread aquifer depletion and extremely high temperatures, and this is putting the world in a difficult situation unlike any we’ve faced before.”

A 2001 report by the United Nations Intergovernmental Panel on Climate Change (IPCC), which calls the 1990s the hottest decade on record, seems to bolster those fears. Brown says global warming is a reality that will continue to affect crops in the future, although he admits it is impossible to single out global warming as the culprit behind one hot summer. “Climates fluctuate from year to year and region to region around the world, so you can never pinpoint which events are directly caused by global warming. But it’s highly likely that it was responsible for the crop damage that occurred this summer,” he says. 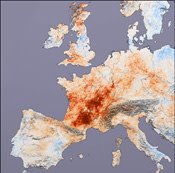 Europe's heat wave was captured by the Moderate Resolution Imaging Spectroradiometer (MODIS) on areas that suffered an increase of 18 degrees Fahrenheit in July temperatures this year, compared to July 2001.

Other experts are not so certain that climate warming will lead to immediate problems. David Easterling, a climatologist at the National Climatic Data Center in Asheville, North Carolina, does not think the current pace of global warming will lead to widespread crop losses anytime soon. In fact, he says, worldwide precipitation should increase as temperatures rise and more water evaporates from large bodies of water, producing more clouds and more rainfall. “In the short term, agriculture may actually benefit from global warming, as long as you don’t have persistent drought,” he says. “Rainfall anomalies can decrease crop yields, but farmers usually like to see a lot of moisture and warmer temperatures. If the temperature suddenly warmed by more than a few degrees, you might start to see problems, but if the normal temperature is 85 and it rises to 88, that’s probably good for growing conditions.”

Down the line, however, continued warming could lead to smaller harvests. “The IPCC scenarios point to a greater problem in the latter half of the 21st century. At that point, temperatures will have risen enough so that evaporation may outweigh the increase in rainfall, and the soil could end up drying out in the summertime,” Easterling says. Worst-case scenarios predict the average global temperature will rise 10 degrees Fahrenheit by the end of the century. In that case, crop damage could be substantial, particularly in less-developed parts of the world, although Easterling thinks farmers in more-developed parts of the world could adapt. “If they start to notice temperature changes, they’ll switch to grain hybrids that may be more tolerant to hotter and drier conditions, and they can use more technologically advanced farming methods,” he says.

But shifts in climate can be rapid and unpredictable, as Europe’s hot, dry summer illustrates. Brown, who has long spoken out about the dangers of global warming, suggests that countries take preventive action right now: Raise taxes on fossil fuel–burning activities and expand research into alternative energy sources, such as solar and hydrogen power. “We may have to come up with short-term solutions, because this issue is far more serious than most people realize,” he says.