Is Global Warming Leading to an Increase in the Total Number of Atlantic Storms? (Part II: Policy Implications) 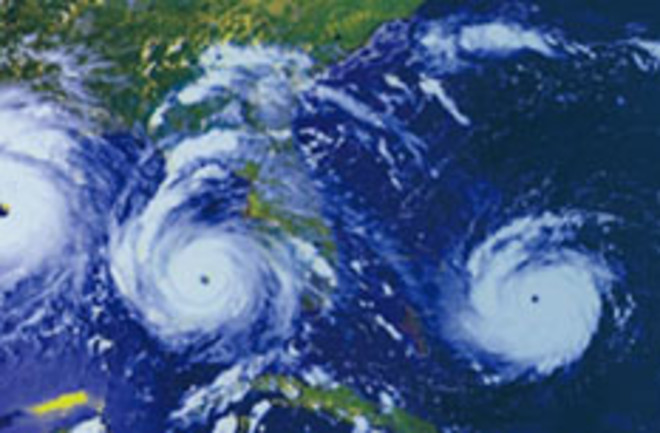 In my previous post, I went into some detail about the intense argument between Greg Holland and Peter Webster on the one hand (PDF), and Chris Landsea on the other (PDF), over whether the total number of Atlantic storms is increasing. And I concluded, somewhat unsatisfyingly, that there may be limits placed upon the extent to which we can determine who's right and wrong in this debate. After all, we will never know for certain how many storms were missed in previous eras. However, that doesn't mean that we can't draw any conclusions about the current debate--it's just that they may not be purely scientific conclusions. Here are some broad takeaway points that I'd like to stress: 1. The hurricane-climate debate is broadening and changing focus. That's a good thing (for science, at least). Back in 2005, the central issue about the relationship between hurricanes and global warming was whether the average hurricane had intensified--globally. But now a new debate has begun over Atlantic storm numbers and how climate change may be affecting those. Expect both debates to rage even as scientists start studying variability in other hurricane attributes as well: Size, regional distribution and tracks, season length, etc. The hurricane-climate relationship has become a hot topic in science, and because it's very complex, it offers many possible angles of attack. As a result, new researchers are diving in and looking at the issue through a variety of different lenses and with a variety of different methodological approaches. This is good for science in the long run. But in the short run, it may lead to a lot of contradictory results, studies, and headlines. As the Times' Andrew Revkin pointed out in comments on the previous post, that's precisely what we'd expect from a relatively young field of science. 2. The best hurricane data are in the Atlantic, so that's where the rubber hits the road. In the prior phase of the hurricane-climate argument, skeptics like Landsea and Bill Gray had similarly argued that global hurricane intensity data become much less reliable as one goes further back in time due to changes in the nature of our observing system (which, of course, has greatly improved over the past several decades). The skeptics further noted that across global hurricane basins, observational methodologies have also varied and, in fact, continue to differ very substantially. For example, the Atlantic is the only basin where there has been regular aircraft reconnaissance of hurricanes for the past 50 years--and airplane reconnaissance is the best way of finding out how intense a hurricane is. The new debate over what's going on in the Atlantic--rather than over what's happening globally--signals a recognition both that we may see different responses in different hurricane basins as a result of global warming, but also that the Atlantic is where the data are most reliable. Now to be sure, those data are not infinitely reliable, as the current debate over missed storms clearly shows. But still, the Atlantic data are much better than the data for the rest of the world. So if scientists can't achieve consensus about what's going on in the Atlantic, they probably won't achieve it for the rest of the world either. 3. More years = more data; but from a societal perspective, we can't wait. We'll never know exactly how many Atlantic storms were missed in 1933--and, therefore, whether it might truly have been a rival to the record 2005 hurricane season. With the exception of a few storms that might be rediscovered here and there thanks to laborious historical or archival research, most missed storms in the past will probably always be missed. However, it's a safe bet that in 2007, there won't be any significant missed Atlantic storms whatsoever--our observing system has literally gotten that good. In fact, with each succeeding year, we will get more reliable data, and the trend in storm numbers (and intensity) will either become increasingly robust or vanish. So we will have a definitive answer, eventually, about whether the Atlantic is indeed changing in an alarming way. However, I would strongly advise against simply assuming that Chris Landsea wins this debate and that, therefore, we don't have to worry about an increase in storm numbers. From a policy perspective, the proper question to ask is, what if Holland and Webster are right? Because if they are, we may not even have seen the worst yet in the Atlantic. As Holland Webster write: "If we project past increases forward, then an increased SST over the next 50 years of, say, 1-2 C could lead to an average of 20-25 cyclones and 10-15 hurricanes per year. " Jesus. 2005 would become the new normal. This is a nightmare scenario, and while it may not be realized, it is bad enough we ought to think of it as a kind of hypothetical worst case and tailor our precautionary plans accordingly. At minimum, that would involve factoring in potential global warming-induced changes to hurricanes, of the sort Holland and Webster are talking about, into any forward looking agenda for the protection of cities like New Orleans. With the second anniversary of Hurricane Katrina coming up, that's a sobering thought indeed.