Is Global Warming Causing More Tornadoes? Not So Fast 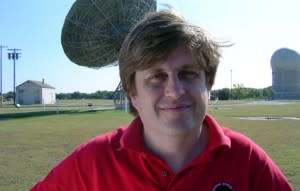 My latest DeSmogBlog post is based on some reporting--and some storm-watching--that I got to do while here in Norman, Oklahoma. It starts like this:

Recently, I witnessed the destructive power of a tornado nearly firsthand. In Norman, Oklahoma on the evening of May 24, I watched the sky darken and unleash a battery of nickel sized hail. Then a funnel cloud twisted down from the clouds, even as the cloud line itself touched earth in the distance, where a tornado had landed. Later, grass and leaves came flying through the air and stuck to our window, debris propelled from miles away. It was terrifying—and more than that, awe inspiring. But what happened in Oklahoma that day, while very destructive and deadly, was nothing near the death toll in Joplin, Missouri two days earlier, or in Alabama in April, a month that set a new record for tornado outbreaks. So much tornado destruction this year, and so many deaths, has inevitably led some to ask the question—could global warming be implicated here? Fortunately, being in Norman, I was also in the place to ask one of our country’s top experts this question—Harold Brooks, a tornado specialist at the National Severe Storms Laboratory. Along with other mainstream scientists, Brooks agrees that “it’s abundantly clear that the surface temperature has increased, and will continue to increase, and the overwhelming evidence is that it’s due to human activities.” Brooks also thinks global warming is likely to impact many weather phenomena--increasing the risk of heat waves, for instance, and stronger precipitation events. “But it doesn’t necessarily mean that every bad weather event is going to get worse,” Brooks continues, and when it comes to tornadoes, “I get really worried when people oversell the case.” After all, if we’re wrong and we go through a series of quiet tornado years in the coming years, it will be just another weapon with which to attack those who want climate action.

You can read the rest of the piece--where Brooks elaborates on why he doubts tornadoes are increasing in number--here.