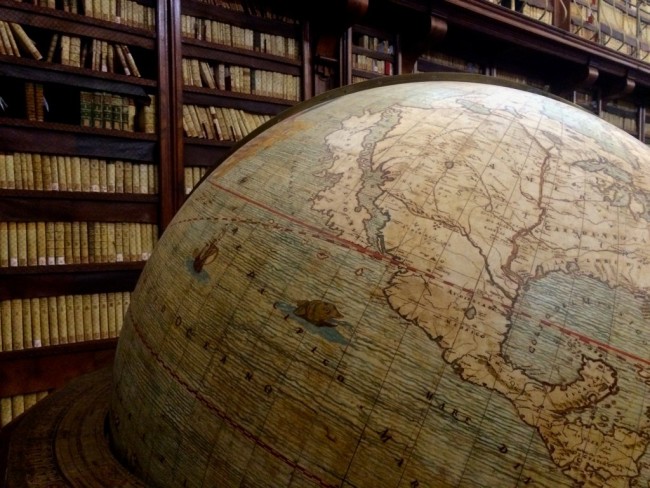 The Moroncelli terrestrial globe in Rome's Casanatense Library. (Image: Jeffrey Marlow) The Casanatense Library in central Rome is a mecca for scholars of the European enlightenment, possessing nearly half a million volumes on medicine, philosophy, literature, law, math, and science. Founded in 1701 by a Dominican monastic order, the library quickly gained a reputation for its extensive collection and cosmopolitan curation. As Casanatense cultural officer Simona Perugia explains, “the people who came to study in the library needed and expected the most recent and important books of knowledge." It was the internet of its time. Over the years, a wide range of knowledge-seekers has entered the monumental vaulted reading room. In his spiritual quest to understand The Story of God, which continues for four more weeks on the National Geographic Channel, Morgan Freeman recently stopped by to learn the truth behind “the number of the beast.” Kim Haines-Eitzen pieced together ancient fragments of the Book of Revelation - found during an archaeological dig in Egypt, now housed in the Casanatense - to point the finger at Emperor Nero.

Centuries ago, other explorers visited the Casanatense for a different reason: to consult the enormous Moroncelli globes before setting out on their own journeys of discovery. The two spheres - representing the terrestrial and celestial realms - are 2.2 meters in diameter and stand like dual altars at the front of the room. 2016 marks the 300th anniversary of the globes’ unveiling, which crystallized an age of rapidly expanding human knowledge. 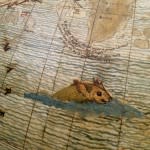 A content cod decorates the Grand Banks in the North Atlantic. (Image: Jeffrey Marlow) Europe is dense with town names and nuanced coastline features. California is an island, an impression likely derived from initial incursions into the modern day Gulf of California. Terra Australis remains prominent in the southern hemisphere, a hypothetical landmass pencilled in by cartographers operating under the theory that land masses north and south of the equator should be roughly equivalent. The oceans, meanwhile, are patrolled by all manner of cartoonized creatures, from the accurate - a playful cod near the Grand Banks - to the fanciful - an apparent sea monster in the South Pacific. Inscriptions offer accounts from exploratory voyages, pinpointing particularly treacherous reefs or harsh winds. The placement of the Prime Meridian is also jarring to a modern viewer. Without the framework of “negative” longitudinal coordinates, early mappers always sought to place the Prime Meridian to the west of the known world. That way, you could move eastward and count up. The set point - as determined by Ptolemy - was in the Canary Islands, a mapping convention reflected by the Moroncelli depiction. It was only in the late 1700s that Greenwich, England took over based on influential lunar navigation charts that had placed the Royal Observatory at longitude zero. Our knowledge of our natural world is always in flux, of course, but the broad brush approximations of the maps are striking. In the modern digital age, previous iterations of our conceptual models are easily paved over and forgotten. Monumental physical objects like the Moroncelli globes immortalize a transient state of understanding, a moment when possibilities were endless and imaginations ran wild, filling in the gaps with one part eyewitness testimony, two parts artistic license. “It is a difficult thing, to understand the world, and these ideas,” says Perugia, gently spinning the sphere with a white gloved finger, “got us to where we are today."