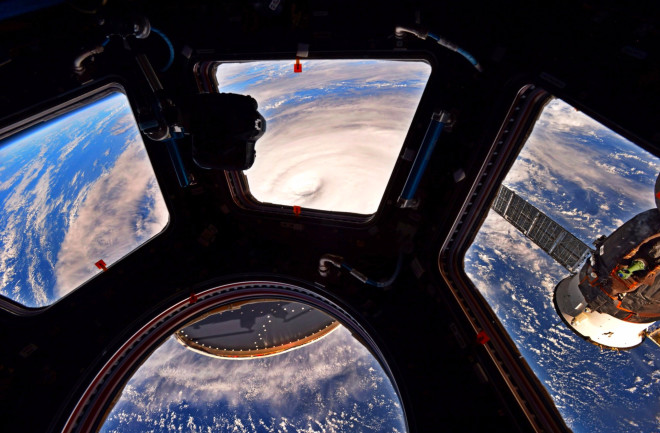 U.S. Astronaut Randy Bresnik took this photograph of Typhoon Noru from the International Space Station. (Source: Randy Bresnik/@AstroKomrade via Twitter) After a very long and strange trip, powerful Typhoon Noru has turned toward Japan. As of Wednesday afternoon in the U.S., the storm's maximum sustained winds were pegged at about 115 miles per hour, putting it in Category 3 territory. It now looks like Noru will come ashore on Saturday in the northern reaches of the Ryukyu Islands, which stretch to the south of Japan's main islands in a gentle arc. The forecast from the Joint Typhoon Warning Center, which is reflected in the graphic below, then takes the storm northward across Kyushu Island, where the city of Nagasaki is located, and then out into the Sea of Japan. But some forecast models show Noru bending to the northeast, which would take it on a potentially deadly march up along the main part of Japan. As the Associated Press reports:

An animation of satellite imagery shows Typhoon Noru with its projected track. (Source: CIMSS) Tomorrow (Thursday, Aug. 3rd), Noru will start on its third week as a tropical cyclone. After its birth on July 20th, Noru meandered aimlessly in the Pacific at no more than Category 1 strength. After doing a do-si-do with a tropical storm it weakened into a tropical storm. But when it wandered into an environment with low wind shear plus very warm surface waters at close to 30°C (86°F), Noru exploded into a roaring Super Typhoon with winds swirling at 160 mph. That made it Earth's strongest storm of the year so far. Since then, Noru has weakened a bit. But it is still one impressive storm, as remarkable photographs taken from the International Space Station by astronaut Randy Bresnik show. Check out the one at the top of this post, and also make sure to click on this one:

A second image of Typhoon Noru as photographed by astronaut Randy Bresnik aboard the International Space Station. (Source: Randy Bresnike/@AstroKomrade via Twitter) Japan's Himawari-8 satellite also has had a great view of the storm. Here's an animation of Himawari-8 images covering about nine hours starting at dawn on Aug. 2, 2017:

An animation of imagery from Japan's Himawari-8 satellite shows Typhoon Noru in the Pacific Ocean south of Japan. (Source: Japan Meteorological Agency via RAMMB/CIRA) Make sure to click on the screenshot above to watch the animation. The high resolution of the imagery reveals fine details, including relatively small vortices in Noru's eye and eye wall. (For a detailed explanation of these vortical swirls, go here.) I've labeled the next image, also from Himawari-8, to provide the geographic context: