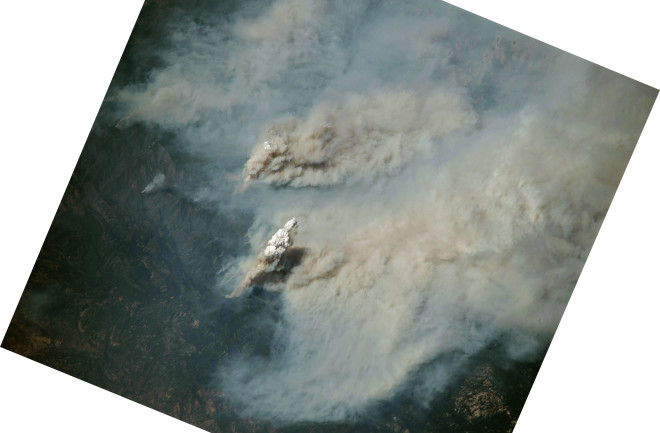 An astronaut aboard the International Space Station took this photo of a towering pyrocumulus cloud rising from the Ferguson Fire near Yosemite National Park. Make sure to click on the image and then click again to view close-up details. (Source: NASA Earth Observatory) When California's 2018 wildfire season is over — if it actually ends — it may well be remembered as the summer of the "new normal." That is, of course, the meme that has exploded across news and social media this summer as an extraordinary series of wildfires has scorched vast swaths of California. I'm not actually sure why the meme didn't take hold last year, which was both the deadliest and most destructive year for wildfires in the state's history, with at least 41 people killed and 9,393 structures destroyed. All told, wildfires scorched 1,266,224 acres of the state in 2017 — an area approaching half the size of the Los Angeles metropolitan area. In any case, I'll save the concept of "new normal" for a future post. Here, I thought I would simply offer a selection of compelling remote sensing imagery of still-burning California wildfires, with some statistics and science woven in for context. Let's start with the image at the top of this post. It was taken by an astronaut aboard the International Space Station on Aug. 2. It shows a towering column of smoke billowing up from the Ferguson Fire near Yosemite National Park. As of today (Aug. 8), the blaze has scorched 94,992 acres and killed two people. It is now the largest fire on record in the Sierra National Forest. Click on the image to open it separately, and then zoom in on the column of smoke by clicking again. The white tops of the smoke tower are characteristic of a pyrocumulus cloud. Clouds like this can form as air currents billowing upward from wildfires carry ash and water vapor above the atmospheric "boundary layer" — the lowest part of the troposphere — and high into the atmosphere.

A pyrocumulus cloud rising above the Beaver Complex fire, as photographed from an Oregon Air National Guard F-15C fighter jet by James Haseltine on July 31, 2014. (Source: James Haseltine via NASA Earth Observatory) As the air currents rise higher and higher, the water vapor cools and condenses into clouds that look just like those in thunderstorms. The stunning image at right shows the view of a pyrocumulus cloud as photographed from a fighter jet above the California-Oregon border in July of 2014. “Many of the larger fires in California have produced pyrocumulus clouds on an almost daily basis,” said Scott Bachmeier, a research meteorologist at the University of Wisconsin-Madison, quoted in a NASA Earth Observatory post.

Satellite image of smoke over the Ranch Fire on Aug. 6, 2018. (Source: NASA Earth Observatory) The image above shows another pyrocumulus cloud, this one above the Ranch Fire. That blaze is part of the Mendocino Complex — now ranked as the largest California wildfire in recorded history. The image was acquired by the Landsat-8 satellite on Aug. 6. Click on this relatively small version and then click again to see detail above the actively burning area, including the pyrocumulus cloud. As of this morning, the Mendocino Complex, consisting of both the Ranch and River fires, had blazed across 251,166 acres. That's one and a half times larger than the City of New York. So far, 221 structures have been destroyed, including 116 homes. And more than 10,000 structures remain threatened. Luckily, firefighters have begun to get a handle on the situation, with containment now up to 46 percent. But a stubbornly persistent high pressure system continues to bring very warm and dry conditions. Overall, nine large wildfires are burning across 601,047 acres in California — and they are generating a mind-boggling amount of smoke, as this animation shows:

Huge amounts of smoke from California wildfires are seen in this animation of satellite images. (Source: RAMSDIS GOES-16 Loop of the Day) This was the view of California and Nevada from the GOES-16 weather satellite on Aug. 6. (Make sure to click on the screenshot to watch the animation, which will open in a new different window.) Remote sensing has helped define just how far and wide the smoke has traveled:

The extent of smoke from wildfires burning in California and other parts of western North America. (Source: NASA GFSC) The image above was created using data from the Ozone Mapping Profiler Suite of instruments aboard the Suomi-NPP satellite. The most extensive pall of thick smoke is seen above Northern California. Winds have carried some of it farther east than Colorado. To the north, smoke from fires blazing in British Columbia has also traveled very far.

Sunset near Boulder, CO on Aug. 2, 2018. (Photo: ©Tom Yulsman) I'll leave you with this image. I shot it with my iPhone from a dock on Coot Lake about five miles from central Boulder, CO, and not far from where I live. When I posted it to Facebook recently, friends commented about the pretty sunset colors and sunlight beams. And for sure, it was a beautiful scene. But those lovely pastel colors and the clearly defined light beams were likely due to a thin but very noticeable scrim of wildfire smoke that had drifted in from the west. This summer, picture-perfect, clear blue skies have been a rarity along Colorado's northern Front Range, the region stretching along the base of the Rockies from Denver north to close to the Wyoming border. I've personally suffered a bit with exacerbation of asthma — nothing terribly bad, and certainly not remotely close to what many people in California are suffering from. But still. I'm supposed to run a one-mile race this evening in downtown Boulder. But I may bag it. The skies are hazy again.