Image of the Day: Cloud Art 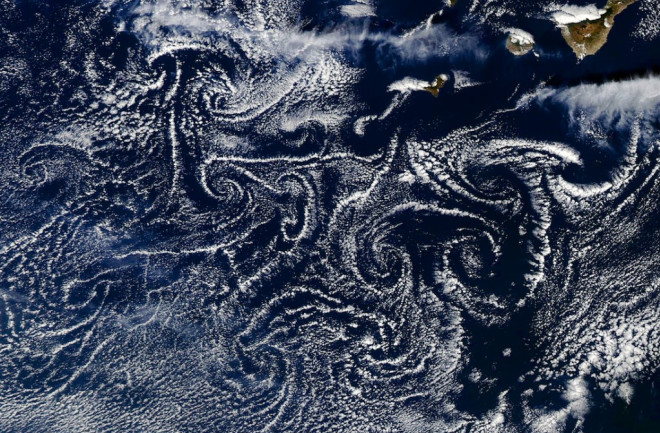 Cloud spirals called Von Karmon Vortices form south of the Canary Islands in the Atlantic Ocean off Africa, as seen in this image from NASA's Aqua satellite captured on Nov. 7, 203. (Source: NASA) While exploring satellite images of the world using NASA's fabulous interactive Worldview application, I found this beautiful pattern of cloud spirals downwind of the Canary Islands, acquired by NASA's Aqua satellite on November 7th. Called Von Karman vortices, they are not all that uncommon. But I've typically seen them in more orderly lines, called "streets," as opposed to the more chaotic and arresting pattern seen here. Call it "cloud art." I wrote about the phenomenon that creates these features in an earlier post, with an accompanying explanatory animation. You can find it here. I also found this striking pattern of clouds above the Indian Ocean just west of Australia, captured by the same satellite on the same day:

Striking cloud patterns formed in the Indian Ocean just west of Australia on Nov. 7, 2013, as captured by NASA's Aqua satellite. (Image: NASA) Lastly, I should mention that I brought both images into my Aperture program to adjust a few parameters. Mostly, I upped the contrast of the midtones to help the white clouds pop against the darker colors of the oceans.