Iceland Eruption, Largest for a Century, Shows No Signs of Stopping 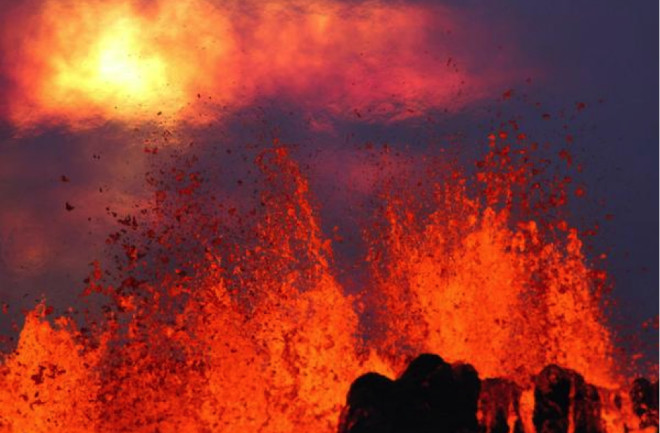 The Bardarbunga eruptive fissure on September 1, 2014. Credit: University of Iceland/Ármann HöskuldssonUpdate 9/11/14: This article has been amended to clarify that this is the most extensive eruption by area covered, not necessarily lava volume. The most extensive lava eruption for over a century is currently underway in central Iceland. Since August 31, liquid rock has been streaming from a mile-long fissure northeast of Bardarbunga, the country's second highest volcano. Ármann Höskuldsson, a volcanologist from the University of Iceland, says that the fissure has now spewed more lava, by area, than any Icelandic eruption since the 19th century. The university's most recent estimate puts the amount of lava at nearly eight square miles — enough to cover a quarter of the island of Manhattan. The fissure has been erupting regularly and vigorously since it opened, shooting lava fountains more than 300ft into the air; the associated lava flows stretch for up to seven miles.

Despite its scale, this eruption is not a particularly dangerous one. Apart from a few intrepid scientists and reporters, the surrounding area is uninhabited, and consequently the lava poses little threat to human life. What’s more, the volcanic ash cloud that was feared by some in the lead-up to the eruption — because of its potential to damage airplane engines — has also failed to materialize. (The eruption is currently emitting only volcanic gas into the air, which does not carry the same risk to aviation.) The main reason for the lack of ash is that the eruption is occurring in an area that is free of ice, the presence of which can cause molten lava to fragment into minute particles of ash. But there are signs that that could change.

On the morning of September 5th, scientists conducting a surveillance flight above the fissure found that the eruption had spread. A new fissure had opened, around one mile south of the original (and still active) one. Lava emission from this second fissure is ongoing. And, while it is much smaller and less energetic than its northern sibling, its location is troubling. The new fissure lies little less than a mile away from a glacier called Dyngjujökull. The first fissure, by contrast, was around 2.5 miles away. This is a potentially important development because, if the eruption were to continue to progress like this, it could eventually reach the glacier — at which point, the likelihood of an ash eruption would increase dramatically.

As yet, there are no signs of that migration. But worryingly, there is yet another scenario which could produce an ash cloud: an eruption from Bardarbunga’s crater. So far, the eruption has been confined to the volcano’s periphery (the two active fissures), with the lava emerging through unglaciated plains. But the volcano itself lies some 25 miles to the southwest, below 2500+ feet of ice. Bardarbunga is buried beneath Vatnajökull, another, much bigger, glacier. Consequently, if the eruption were to migrate to here, the risk of ash emission would rise steeply. There are no signs that a crater eruption is imminent. But something is shifting beneath the ice; the volcano is being rocked by regular, large earthquakes; and the crater appears to be subsiding at a rate not seen since records began. How much ash a subglacial eruption might generate cannot be guessed. But the infamous eruption of Eyjafjallajökull four years ago — which forced the biggest closure of European airspace since the Second World War — is testament to the power of Iceland's volcanoes. For now, Bardarbunga is putting on some great fireworks. But they could pale in comparison to what is lurking beneath the ice.