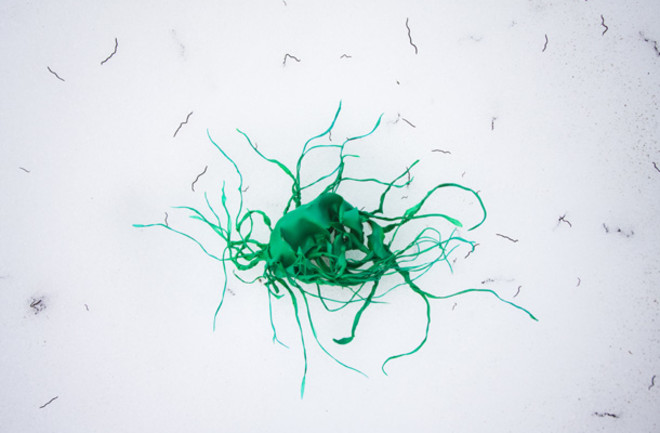 The brown squiggles you see here are ice worms making their living on the surface of the Whitechuck Glacier in the Cascade Mountains of Washington State. These relatives of earthworms---seen here alongside a disintegrating balloon littering the ice---are found only on the glaciers of the North American west coast, where they graze on algae and bacteria. Unlike other animals, the worms have a metabolism that seems to increase at lower temperatures; they typically die above 50 degrees Fahrenheit, and their tissues begin to break down at about 70 degrees. Some glaciers house more than 250 worms per square foot of ice, but as glaciers in the region recede, the worms are expected to disappear along with them. They can be hard to photograph, because they avoid light and mostly appear at night. Photographer Ethan Welty: "I'd found balloons snagged on high peaks in the Cascades before, but there was something particularly alarming about the one I found on Whitechuck Glacier, the juxtaposition of the tangly green appendages of the balloon with the delicate black filaments of the surrounding ice worms." Ethan Welty/Aurora Photos